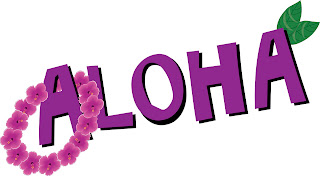 I'm off for a week of the sun and whale watching on Maui. I may not be posting but I will be looking at the blog when I have time. Let's hope I don't. It will be great to be away from the trolls who seem to think it is their life's mission to check up on what I'm writing and immediately send me a response. People could actually just look at my blog. They could read it and not respond. But I guess the pro gun extremists who read this blog just have to bring me down a peg or two and find fault with what I write. Whatever.

Let's take a look at Hawaii's gun laws as long as I will be spending some time there. Hawaii has some of the strictest gun control laws in the country. Hawaii also has the lowest rate of gun deaths in the country. The rate of gun deaths per 100,000 in the state of Hawaii is 2.82 and from the article: " Louisiana had the nation's highest gun death rate, at 19.87, followed by Mississippi at 18.32 and Alabama at 17.62, according to the center." The rate of gun ownership in Hawaii is also low compared to the states with the highest rate of gun deaths. Only 9.8% of Hawaiians own guns. This, from the study by the Violence Policy Center quoted in the article: " States such as Louisiana, Mississippi and Alabama had the nation's highest gun ownership rates, at between 46 and 57 percent, and also had the highest gun death rates, the study found." Does anyone see a pattern here? I do. And from the Honolulu police chief comes this:

"The Islands' low gun death rate should also be attributed to the people of Hawai'i who exemplify the aloha spirit not only in times of emergencies and disasters but throughout the year," Kealoha said.

He said HPD is proactive in seeking new gun legislation such as supporting a bill which would raise penalties for those who use airsoft replica pellet guns in terroristic threatening or robbery cases.

How refreshing. Someone who speaks common sense and a state that believes that restrictions on guns are necessary for public safety. Who needs a gun in Hawaii anyway? Where would you put a gun while surfing or enjoying that wonderful boat trip to Lanai where waves are washing over the side of the boat and there is not a care in the world. We visited Lanai on our first trip to Maui 5 years ago and found it to be a wonderful, isolated island with one of the most beautiful beaches in the world. Snorkeling there was amazing. It's hard for me to believe that people actually feel a need to carry a gun while visiting Hawaii. Such a relaxing trip should not be marred by paranoia about danger lurking around every corner. There is probably more danger from a potential tsunami. I am also hoping I won't experience that. 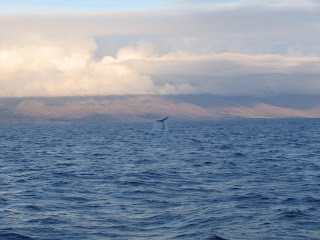 This photo is from my first visit to Hawaii and from the boat that took us to Lanai and back to Maui. I fell in love with the whales.

So Aloha everyone. See you when I get home. Be careful out there.
Posted by japete at 8:00 AM