What are we fighting about? 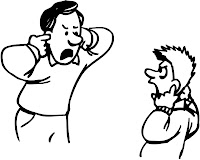 Some of you don't like what I write. I know that. We don't agree. I know that. That does not make you right and me wrong. It means that I am stating some strongly held opinions and views that I have held most of my life that are different from yours. I am not writing a pro gun blog. I am writing a blog advocating for reasonable and common sense gun laws and a gun culture that recognizes that such laws will not confiscate guns or take away rights. But we continue to go around and around with some of you wanting me to answer every question or comment submitted. If I don't, I'm cutting off debate.  Sometimes a topic gets exhausted and further discussion doesn't go anywhere or lead us to further understanding. But I want to talk on this post about some of the broad questions of public policy that have been enacted for the common good.

There has been an exchange about my views and my facts about bans on consumer products and whether there should be any restrictions on anything. Some of you think bans and restrictions on products don't do any good- particularly on drugs and synthetic drugs, such as bath salts to which I referred in my previous post. I don't agree. I believe that some things should be more difficult to get and in some cases banned. I get that prohibition doesn't always work. We learned that during the 1920s during the days of alcohol prohibition. Most of the time, the prohibition or ban of products or how they are used come about for good reasons. From the linked article:


By using pressure politics on legislators, the Anti-Saloon League achieved the goal of nationwide prohibition during World War I, emphasizing the need to destroy the political corruption of the saloons, the political power of the German-based brewing industry, and the need to reduce domestic violence in the home.

But then, Prohibition actually led to worse problems, including a lot of gun violence and mobsters on our streets causing mayhem.


The repeal movement was started by a wealthy Republican, Pauline Sabin, who said that prohibition should be repealed because it made the US a nation of hypocrites and undermined its respect for the rule of law. Her fellow Republicans were put in office by the "drys" and, even though they eagerly partook in consumption of the adult beverages at her parties, in public they presented themselves as opposing repeal of prohibition, lest they be thrown out of office by the dry voting blocks. This hypocrisy and the fact that women led the prohibition movement convinced her to start the organization that eventually led to the repeal of prohibition. When her fellow Republicans would not support her efforts she went to the Democrats and who changed from drys to supporting repeal led by conservative Democrats and Catholics, emphasized that repeal would generate enormous sums of much needed tax revenue, and weaken the base of organized crime.

So aside from the fact that the prohibition of alcohol did not necessarily stop Americans from drinking alcohol, there was an economic benefit to repealing it- tax revenues. Repeal of prohibition did not solve problems of alcoholism, drunk driving, health and family problems, etc. We have gradually instituted legal limits on alcohol and established programs for alcoholics. Drinking while driving leads to many senseless deaths of innocent people. We have legal limits over which people can be arrested if they are caught driving or shooting or beating on their spouses or partners, etc. Making it harder and more strict, in the case of alcohol consumption, has raised our collective consciousness and changed behaviors. People now often use designated drivers when partying or call a cab instead of driving home from a bar or a party. And people are more open in talking about alcoholism as a disease and some even admitting to having been an alcoholic. The culture has changed over time but alcoholism has not been eliminated. That was likely never the goal in the first place.

The medical profession knows that the use of bath salts has led to terrible consequences. Those who abuse them are found in emergency rooms out of control and often need to be subdued so they don't harm those around them. They are found in the streets having overdosed. It has caused an increase in costs to health care and in costs to emotional and physical well being of the users and their families. Emergency room staff are in harm's way when users come in having overdosed and in need of emergency health care. Thus, laws are being passed to ban the drugs. At the least we will make it harder for folks to get their hands on them and hopefully reduce the visits to emergency rooms and the harm to innocent people. Such is the case with other products as well. We can not always stop people from doing harmful things but we shouldn't, as a society and a government, make it easier to do so. That is why laws are passed. If they don't work, other solutions will be found or laws will be altered, amended or reconsidered.

As a country, we have come to understand, through advocacy, fact gathering and public policy, that  smoking is a health risk that has not only raised insurance premiums for all of us, but causes life threatening illnesses and harm to innocent people from second hand smoke. State after state have passed laws about where people can and cannot smoke in public. This is a sacrifice by smokers but it has nonetheless become law and is now pretty much accepted. Advertising for cigarrettes has pretty much disappeared and warning labels appear on cigarette packages.

Similar measures happened with seat belts and air bags in cars. It took years of horrible accidents, law suits against car manufacturers, public advocacy and now public policy but we have come to accept that when we get into our cars, most people buckle up. We have regulations on child safety car seats and the ages for each type of seat and when children are safe to sit in a car without a special seat. It has become common practice and is for the good of individuals and society.

And so to the topic of gun restrictions. I do not live in the gun culture where guns are sacrosanct and necessary for my well being. I live in a different culture. Most Americans do not live in the world of those whose guns have become part of their religion. They may even own guns but understand that there can be reasonable limits on the guns, who has them, where they can be carried, and how they are used. We have come to understand that we, as a society, accept some limits on things for the common good. That is why I advocate for gun violence prevention measures that can lead to better public safety and will be for the common good. Thus far, public advocacy has not worked to change public policy. That is mostly because of the fierce resistance from the well funded and powerful gun lobby and its' followers. Gun violence has become institutionalized in America just as once upon a time, smoking, car accidents and alcoholism were- until people decided they had had enough and changes happened to call attention to the public dangers. When the public came to realize that these safety and health concerns could affect their own lives and their own families, solutions for prevention were enacted and are now part of our every day lives. Shootings don't have to part of our every day lives. How to prevent them is where the resistance occurs and where the battle of words takes place on blogs, in legislatures, in Congress and in the media.

Similar resistance occurred with smoking bans, mandatory seat belt laws, prohibition and now bath salts, as some examples. But none of those fights were as fierce as the one put up by the NRA. Why is that? I believe it is because the second amendment is trotted out as a show stopper. It is used by advocates and law makers alike to avoid having to make tough public safety and policy decisions that should be happening. In spite of claims of the "slippery slope", it's been sliding in the direction of the gun lobby. Below is a video from the Public Broadcasting Show, "Need to Know" featuring John Meacham. I like this one because he says so eloquently what most of us in the gun violence prevention community believe. Please watch.

There are some kinds of ammunition that should be banned. There are even some kinds of guns that should be banned. There are places where guns should be banned. There is a broader view here. Sometimes things are advocated for and enacted because they are just plain right to do. Maybe one mass shooting too many will finally seep into the consciousness of the American public and  there will be a demand for public policy changes to prevent senseless shootings. Perhaps elected leaders will decide to stand up for the victims and for what's right and lead the effort towards public policy that will be the right thing to do for public health and safety and the common good.
Posted by japete at 10:41 AM