Should the guys with the guns get to decide about work place safety violations? 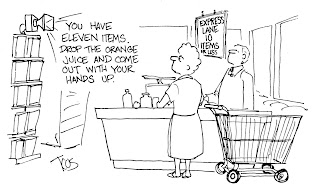 In my recent blog post, I wrote about the tragic events over the holiday week-end leading to the deaths and injuries of 34 people. By the way, the 3 year old Minnesota boy who was shot by a stray bullet has moved from the injured column to the dead column. Senseless. But then, as usual, the gun rights extremists who comment on my blog, love to catch me up and try to "one up" me by sending me articles about people using guns in self defense or to stop robberies or other crimes. Never mind that mayhem and shootings are occurring every day in our communities. Hardly anyone wants to comment about that. Instead, they try to change the subject by finding some article about what they consider a justifiable use of a gun to avoid having to deal with the carnage caused by bullets. Such was the case when one of my readers sent me an article about an Indiana Kroger's food store worker who "saved the day" in an attempted robbery at the store by bringing out his own gun and shooting the robber in the face. You can see the back and forth on the linked post above.

Here is more on the matter in this article.


Police aren't saying anything more until the investigation is complete, including whether the "hard object" was a gun.

(...) Records suggest Elliott at one time had a carry permit for a gun, but it's uncertain whether that's still the case because lawmakers recently changed the law to make such information confidential.

(...) Gun owners aren't necessarily trained in how to deal with dangerous situations. If another employee one day fires a gun and accidentally hurts an innocent person, the company could become liable if it's thought to be permissive of workplace weapon use, said Blickman, a partner in the labor and employment group at Ice Miller.

Indeed, that's why many companies have a no-guns-allowed rule in the first place.
"It's one of the most commonly adopted rules," Blickman said, "whether you are a large employer or a small employer."
Disciplining or firing the employee is no easy fix either, Blickman said, "given that most people are likely relieved at the outcome."
Kroger has to be wondering whether coming down hard on the employee could lead to a boycott, Blickman said -- or worse. "What if there's an organized effort by the NRA?"

What? An organized effort by the NRA? You're kidding, right? So the worker, who violated his company's work rules and possibly state gun laws should not be disciplined because the NRA will cause a fuss? Folks, I submit to you that, once again, the guys with the guns make the rules. Where is common sense?


"I would hope that employers would recognize that their employees have a right to life, liberty and the pursuit of happiness," Tomes said. "If they chose a policy that jeopardizes any of those, they have to accept the responsibility."

And, I would add, the right to shoot somebody over "stuff". There is much more to come about this case as it is under investigation. Was the store employee justified in the shooting? Did the robber intend to shoot someone to kill? Did the robber have a gun? Is this a shoot first situation where a shooting is justified for self defense or the inevitability of bodily harm? Would the robber just have gotten the employee into a place where he could have taken money with no harm? And why aren't we doing more to keep felons from getting guns in the first place? Where is common sense?