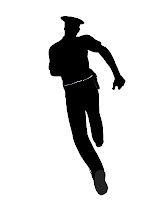 Last week there were a number of killings of law enforcement officers in America. Several were wounded as well. This one in Brooklyn, NY is just the latest of the incidents. This officer was responding to a burglary and was surprised by one of two burglars who had broken into a home. From the article:


Officer Figoski, a father of four daughters and the brother of a retired city police officer, was shot with an illegal semiautomatic weapon, Mr. Bloomberg said. He had made over 200 arrests, nearly half of them felony arrests, Mr. Kelly said. He worked out of the 75th Precinct, one of the city’s most crime-ridden, where has has spent most of his career.

An illegal semiautomatic weapon used in a crime should be no surprise. But it would be good to know why it is illegal. Perhaps we will found out more in later details. But I digress. Back to officer shootings...

The Virginia Tech shooting of an officer seemed totally bizarre and senseless as details are emerging about the shooter. From the New Trajectory blog comes this information:


You see, Ashley had no previous criminal record.  He had shaved his head and was known to run rather than walk, but otherwise showed no clear signs of mental illness.  He was a student, attending part-time at the business school at Radford University, 16 minutes away from VT.  He was of legal age to purchase a firearm and have a concealed carry license.  He is described as being friendly, nice, and quiet.  He never talked about guns, drank, or used drugs (although he owned a gun and had visited a shooting range), wasn't a loner, and had been a star football player in high school.  And he was academically achieved, having served on Student Government committees and been on the dean's list at the University of Virginia’s College at Wise in Southwest Virginia in recent years.  This is a young man who seemed to have everything going for him.  It's unclear if he had a concealed carry license, but there was nothing stopping him from getting one.

Another officer was shot in Virginia on a busy freeway as traffic was whizzing by. A man who had already been stopped for erratic driving and was fleeing on foot was apprehended by the officer who had him in his patrol car when the suspect grabbed the officer's gun and the officer was shot in the leg. He then shot the suspect with another gun and mortally wounded the man. As usual, there will be more about this investigation going forward. But this is another bizarre shooting as they often are. Things can go terribly wrong when a lethal weapon is involved and most particularly with guns. In this case, the officer was shot with his own gun at first. This does raise the obvious question about why gun owners believe so completely in their own ability to defend themselves when confronted by someone who is dangerous to them? There are plenty of cases of armed officers and or gun owners whose own guns have been used against them. This one in my own state is one very tragic case of an officer responding to a domestic case and ending up losing his own life as the suspect grabbed his gun and shot him to death.

And in North Carolina, a Sheriff's deputy lost his life when he responded to a domestic disturbance. So, by my count, in the matter of just a few days, 3 officers were killed and another several injured by people with guns. And those are just the ones that have been brought to my attention.

So how many law enforcement officers lose their lives to gun injuries in America? From the National Law Enforcement Officers Memorial Fund, we learn this about gun fatalities of officers in 2010:

And further, when looking at some graphs on the website linked to above, we learn this:


For the second year in a row, officers continue to be shot  in ambush style attacks. In 2010, twelve officers were killed in these vicious attacks accounting for 20 percent of all fatal shootings.  Eight officers were killed responding to domestic violence calls, a drop from 12 in 2009.

Good grief. What is going on? Ambush style attacks? That seems like calculated shootings of officers by people who do not like the police. Such was the case in 2009 in Tacoma, WA where 4 officers were gunned down in a surprise attack as they were going over records in a coffee shop. And in Pittsburgh, PA in 2009, 3 officers were gunned down by a gun permit holder "lying in wait" in a domestic disturbance call. That's 7 in one year who were ambushed. What is going on in our country? Are officers such a threat or hated by certain people for whom "revenge" or an act of violence is a message? Officers are outgunned in America. Some of the commenters on this blog believe they should be armed just like police officers. After all, since police can't or won't ( as some claim) respond quickly enough when you need them, you yourself need to be as heavily armed as police officers. What kind of world do we live in when civilians become their own little militia or law enforcement entity? Something is wrong with this picture.

We do know from the Violence Policy Center that 11 law enforcement officers have been shot by gun permit holders since 2007 when they began collecting the data. That might not seem like many to some but to the 11 families and the friends of these officers, it is 11 too many. Gun permit holders are not as safe with their guns as they are claimed to be by the NRA and other gun rights advocates. If they were, we wouldn't have the kinds of accidental and intentional shootings that occur regularly in our country. On the VPC website linked above, we also see that in total, 385 Americans have been killed since 2007 by gun permit holders. Police officers are certainly at risk here as they pull people over for traffic violations or confront armed people in homes and on our streets.

Now let's look at the UK for example where, for the most part, police officers don't carry guns. But then, citizens in England don't either.


In the year 2007-08, there were 6,780 Authorised Firearms Officers, 21,181 police operations in which firearms were authorised throughout England and Wales and 7 incidents where conventional firearms were used.

Seven cases of use of conventional firearms by trained officers in the UK? You must be kidding!
This website shows numbers of total gun deaths in the UK through 2006 and then breaks out the injuries and deaths of officers. Check it out. Zero officers where killed through 2006 by guns in the UK. Here is a good article from the BBC about gun laws and the strict gun licensing laws in the UK that make that country so different from the U.S. It also leads to almost no police officers losing their lives to bullets and very few shootings by officers themselves.

Sometimes officers or former officers violate the law by shooting a family member or friend with a personal firearm. This ex-officer had his own problems and almost took it out on a bunch of people innocently celebrating at a holiday party at a Missouri hotel. Clearly this was a domestic case that officers often respond to themselves, placing them at great risk for their own lives. This officer shot and killed his ex-wife and her boyfriend in what seems to be a custody battle. Would this have happened without that gun? I submit that it wouldn't have. Common sense gun laws actually work. We can see that from the examples I provided for the UK. They can work in America too if the gun lobby and its'  bought and paid for elected leaders would support legislation to make our communities safer.
Posted by japete at 6:56 AM