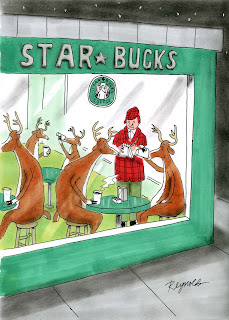 If you want to go to Starbucks for coffee or a treat, you might think it's a safe place. If you think it's a safe place, you won't be worried about needing a gun. If you think you need a gun at Starbucks, you are thinking there is danger in every nook and cranny. So if there is danger lurking at a Starbucks store, some might think they need to carry a gun to a Starbucks store. If you take a gun to Starbucks, you will need to carry it somewhere. When you carry it, you will want to make sure it won't discharge. Otherwise you might have some trouble. When you have some trouble, you'll be thinking you should have been more careful. Then maybe you will re-consider carrying that gun to Starbucks. If you re-consider carrying a loaded gun in your purse, your purse won't "go off." If your purse doesn't "go off" then there won't be danger at a Starbucks store. If there aren't people carrying guns in Starbucks, customers will be safe from purses "going off". If a bullet discharges from that purse and misses innocent Starbucks customers, then you are lucky. If a bullet discharges and hits somebody you are not lucky. If you are a 17 year old girl who shouldn't be carrying a loaded gun around in public in the first place, you are unlucky that your "purse went off" in a Starbucks store. If police officers are sitting at the Starbucks where your purse "goes off" you are again unlucky. It the police decide you shouldn't have been carrying that loaded gun in the first place, you are unlucky and in trouble. If the police officer gives the gun back to your parents, your parents are lucky that is all that happened. If your parents think it's O.K. for you, as a 17 year old, to carry a gun around in your purse, then they have not used good judgement. If 17 year old girls carry guns in their purses at Starbucks, then we are all less safe. If Starbucks would post signs saying guns are not allowed in their stores, perhaps 17 year old girls with loaded guns would think twice about bringing guns to places where other people hang out and don't need their guns with their lattés. When people don't need guns with their lattés, there will be fewer guns in public places. When there are fewer guns in public places, there won't be so many accidental and intentional shootings of innocent people. When there are fewer shootings of innocent people, our communities will be safer. When our communities are safer, fewer families will grieve over lost loved ones or suffer from life-long gun injuries. When there are fewer families grieving, America's health and safety problem with guns will be less concerning. When people feel safe from other people with guns at Starbucks they won't need to carry their guns at Starbucks when they go for a coffee or a treat.

I love the books written by Laura Numeroff and illustrated by Felicia Bond. It started with "If you Give a Mouse a Cookie" and the others followed.

So above was my version based on this disturbing story about a 17 year old girl whose gun discharged in a Wyoming Starbucks store:

After the round fired, the girl said, “I think my purse went off!”

According to the Cheyenne Police report about the incident, the girl, whose name is being withheld because she is a juvenile, dropped her purse around 6:45 a.m. Monday while she was at the cash register at Starbucks, 1112 Central Ave.

Two Cheyenne Police officers were in the coffee shop at the time. Once they heard the gunshot, they drew their pistols and scanned the shop.

(...) According to the report, the bullet missed John Basile, 43, by about 12 inches. After nearly missing Basile’s head, the bullet hit the west wall of the store, bounced back to the east and rolled under the coffee counter.

The officers had the teen call her parents, who responded to Starbucks shortly after the incident.

The girl’s father said he had given the teen the pistol and encouraged her to carry it while traveling for her protection.

The girl said she keeps the gun in her room and had it with her because she was going to visit friends in Laramie.

And more from the story:

The teen’s mother told police that she doesn’t particularly like firearms because they “may just go off.” She said she knew her daughter had a pistol and encouraged her to point it at a “bad person” if she was ever in trouble.
The gun was returned to the teen’s parents.
The girl was issued a city summons for possession of a firearm by a juvenile, which carries a $750 bond and a “must appear in court” stipulation.
City ordinance stipulates that individuals must be 18 years old to carry any type of firearm within city limits.
Wyoming state statutes state that a person must be 21 years old to carry a concealed weapon.
According to federal law, individuals must be 21 years old to buy a pistol and 18 to buy a rifle or shotgun.


Too many questions are raised by this incident: