Hunters and permit holders in the news 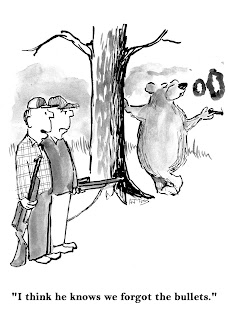 I wasn't planning on writing this particular post but when things "come across my desk" that deserve the light of day, I think the public has a right to know what's going on in the gun world. This one first- yet another "law abiding" gun permit holder tries to get his loaded gun through Detroit airport security. The man claimed that he forgot about the gun. Come on. When you get dressed in the morning and strap your gun around your ankle, you must know it's there. There is a solution to this problem. Don't put the darned gun on your ankle that morning, knowing you are traveling on a plane. Are permit holders so forgetful or are they so paranoid that, as I've said before, without their gun they are naked? This is not an isolated incident if you read my post about guns and airport security. This is the result of a culture that has evolved in America among gun rights extremists that guns are necessary in places where they are not necessary. Further, there are places where guns are not allowed. Law abiding gun owners should be hyper aware of that. With rights come responsibilities.

Oh, and oops- here's another law abiding gun owner who forgot his responsibilities. A Georgia airport security agent accidentally shot himself in the face with a gun found in a traveler's carry-on bag. And why was the gun in the man's bag? "He told police that he often travelled to Florida on business and 'kept the weapon on him for protection, not to kill anyone but in an attempt to scare people off'." Really? Who would he want to scare off at the airport? Maybe other "law abiding" gun owners who forgot they had their loaded gun in their carry-on? Such nonsense is not acceptable. Guns are dangerous. They actually do kill people and are used less often to scare someone off than in actual shootings.

And speaking of responsibilities, what about the Texas hunters who are alleged to have accidentally shot and injured two nearby Middle School students? One is in critical condition. Good grief. Can't we send our kids to school in the morning without thinking about whether they will be shot by hunters before the end of the day? What happened to the idea that having gun ranges, hunting grounds and gun shops close to schools is a bad idea? What happened to common sense? Allowing hunting this close to a school is simply a terrible idea. You may remember that I wrote about this in my post about visiting my daughter in Pennsylvania at Thanksgiving time and hearing gunshots fairly close by in nearby woods.

And last, but certainly not least, is this tragic shooting in Pittsburgh. A woman killed her 21 year old son and then herself. This is just one of the many domestic shootings that occur daily in our country. When guns are available, they get used to take care of family problems or in the midst of arguments, depression, break-ups, alcohol and drug use, etc. Where is common sense?
Posted by japete at 12:12 PM