Guns for fun and airport security 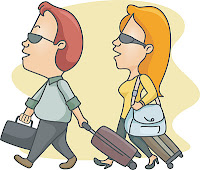 Why on earth does a 17 year old girl want a purse with a gun design on it that looks so real that airport security detained her? This teen was traveling from Virginia to Florida with a purse that has a design that looks like a real gun embedded in it. Take a look and tell me what you think.

There are a host of questions here. Why should there even be a purse with this design? Where do you get purses like this anyway? ( in case I want to buy one) I checked here, here, and here with no luck. Oh well. Maybe she got her purse at this site which seems to be having problems. It says that the site may be harmful to my computer. I wonder what that means? But then, here , I may have found something similar to the purse in question in the story. Great. But I digress. What is the purpose of carrying such a purse around? Is it to provoke people? To make a statement? To let people know that they should not mess with you? Is it just for fun? Why does a young girl think this is a good idea? Did her parents know about this purse? Who bought it for her and what were they thinking? Does it seem appropriate to you? The teen is pregnant so one has to wonder what role model this will be for her young child? There's a message here and it's not one of "peace on earth, good will towards men." It's the holiday season- just thought I'd throw that in.

It's amazing though how many guns or replica guns people do try to get through airport security. Having flown recently, I am so aware of what I can and cannot put into my carry-on bag and what I can and cannot wear when going through the security area. When someone says that it was a mistake when a gun is found in their carry-on, I say nonsense. If you own a firearm and intend to travel with it, you should know the rules. Even the NRA has good advice for people when traveling with their guns. There are plenty of warnings about firearms on planes for anyone who can read. Here's a recent stupid mistake involving a gun in a carry-on in Arkansas. Why would this man have forgotten about his gun? Maybe it's this:" In some cases, Hastings says people with concealed carry permits forget to leave their guns at home when preparing to travel." Many conceal carry permit holders think that guns MUST be with them at all times even though they really don't need them everywhere they go. But they have so convinced themselves that they are "naked" without their guns that they actually forget that they have them in clothing or a box or a carry-on. I have written many times about accidental gun discharges when this happens. Oops- I forgot my gun was in my jacket pocket and when I put it down at a restaurant, it fired and hit a woman in the back causing her life-long medical issues. Or, oops- I forgot about that gun in a box and when we were moving it, the gun discharged and hit and injured someone. Or, oops, I forgot that I had my gun in my purse and when I put it down, the gun discharged and fired, narrowly missing a person nearby. Oops, I forgot that my gun was in the glove compartment and tragically, now my child is dead from the gunshot injury.

Seriously folks, these things have actually happened. This is the problem with a culture where some people believe they need their guns everywhere they go. Haven't they learned that there are places where people shouldn't have guns and where they are prohibited? Haven't they learned that some of us, the majority actually since only 2-3% carry their guns around in this country, don't want those guns around in public where we gather?  Sometimes people who can't be trusted want to take guns and other weapons or methods of killing innocent people on airplanes or in other public places. This TSA blog post talks about a recent claim of a woman being strip searched and the reasons for what some people claim are invasive searches at airport screening. The blog refers to the arrest of some elderly Georgia men who had plans to attack innocent people with various forms of destruction, including guns, ricin, and explosives. I blogged about that incident when it happened. Still, though, guns and other prohibited items make it through TSA screening in spite of efforts to the contrary. The fact that the screeners at the Virginia airport wouldn't allow the purse with a real looking gun in the design get on a plane makes me hope that they won't miss the real thing when someone has it.

This TSA blog is an interesting read about what screeners find ( or don't find) in carry-ons at airports.  "Sometimes after reading the incident reports, it‘s as though they’re having a gun and knife convention at the airport. " Grenades? Loose ammo? I thought these folks who carry their guns around in public were responsible law abiding citizens. That's what they tell us. That's what they have told our legislators all over the country. Just trust us. We law abiding citizens don't do anything wrong with our guns. We are trained ( or not since some states have no hands-on training for permit holders or even permits, for that matter) with these lethal weapons. We won't do anything wrong with our guns. Until of course, someone does.  Where is common sense?
Posted by japete at 1:09 PM