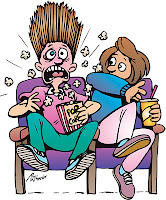 Hey all. Some days so much stuff comes my way, it's hard to know where to begin. Get out your popcorn. I have assembled some videos of interest and concern for my readers/viewers. So let's begin right here with a great example of the two sides of the gun debate. One is expressed by several people who have some differing views of what's reasonable. The other by Rep. Darrell Issa of California. Here is the video. Watch for yourself.

This one is very short and sweet and doesn't need any explanation. Out of the mouths of babes......:

This one also speaks for itself. It is a hidden camera video of two people purchasing guns without background checks at a Texas gun show.

And this Public Service Announcement shows the graphic results of gun violence. The fictional collage of what a bullet can do to real human beings who die from bullets 30,000 times a year in the U.S.

Attorney General Eric Holder testified in front of the Senate Judiciary Committee. He made it clear that the ATF's Fast and Furious program was a serious problem with many errors made. But the main problem is still that the U.S. is supplying too many dangerous guns to the Mexican Drug Cartel.

I hope you enjoyed the videos. They should have scared you into action. If you are done with your popcorn, please act to prevent senseless gun violence. Common sense should tell our leaders to stand up against the NRA and do the right thing for public health and safety.