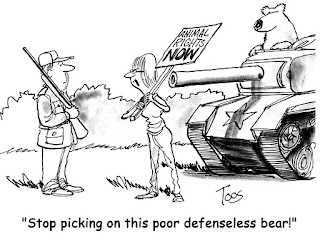 I, too, gained so much understanding about my Dad's experiences after watching the Ken Burns series about World War II. I was stunned to learn of the carnage and bravery of the landing at Anzio in Italy about which my Dad never spoke. He spoke only of the camaraderie of the guys with whom he served. I understood much more after finding some books, photos and articles about the Red Bulls when my mother moved out of her house. I learned about the conditions under which the Red Bull division served and died. I gained more understanding of my Dad's panic attacks that were not spoken of in my house.

What I don't understand are civilians who want to play at war. What is the fascination with military weapons of war? I just don't understand how you can go to Las Vegas and pretend you are part of the war and shoot off the same weapons the U.S. military uses. And right here in Minnesota, people can play with tanks, thanks to a man who managed to buy some. On some level I actually do get some of this. Some people love big powerful vehicles or just plain vehicles that make lots of noise. My husband would just love to own a few more small machines for work at our cabin. My grandsons have loved trucks and cars since they were very young. My own son did as well. He didn't have any toy guns but many other things became guns- sticks, pencils, pieces of wood, etc. Bit I digress. You can do other things at this "tank farm" as well:


That’s right. For $500, you get the chance to crush a car with a tank. Also included with the price of admission, you can test fire some of their historic firearms in the indoor shooting range. There are a lot of choices, including a circa 1942 Tommie gun and a World War II 0.30-caliber machine gun.

The reporter is correct when he talks about people liking to touch the tanks and the guns as historic pieces. When I visited Normandy, in France, I was fascinated and sobered by imagining American troops coming to the shores of Omaha, Gold and the other Beaches in the troop carriers. But then, I couldn't get out of my mind the slaughter that took place on those beaches once I saw the landscape and realized what easy targets the soldiers were for the Germans, encamped on higher ground with clear lines of vision to the beaches. I touched the sand and stood in awe and silence. I cried when placing a rose at the grave of a Minnesota service man, unknown to me, who had died there. It is sobering to visit the war museums all around the world and our own country. Visiting Gettysburg left me with that same feeling that way too many people have died brutally in battles started over things that could perhaps have been settled in a different way. But history tells us that wars have been fought over things small and large that, it seems, only killing others could resolve.

Very early historical accounts of battles are fascinating reading. Homer's Iliad is one example. The battle scenes from the Iliad, supposedly on the plains of Troy are brutal and stark. I could almost conjure up the battle scenes from the Iliad while visiting the ruins of Troy, located in what is now modern Turkey. This fictional account of what was likely a real battle scene somewhere in Asia Minor, is taken by some as an anti-war writing. The tragedy of war is starkly and poetically written by Homer; the pleas with Hector to retreat; his good-byes to his young son; other unforgettable scenes of the personal struggles of the war heroes. It seems to me that preparing oneself for war or playing war games for ordinary citizens does not properly acknowledge that war means the death of real people.

And further, more Americans have been killed by guns than in all of the American wars combined since the beginning of the 20th century. That is and should be sobering to us all. We do, apparently, have a war going on on our streets and in our communities. When people amass weapons of war to use in envisioning a battle with their own government, it's time to stop and think about what this means for our country.

Yes, there are clearly Americans who are getting themselves ready for that time. This Florida Congressman said some questionable things recently. What do these words mean? Are some getting ready for battle right here at home?


Guns figure prominently in American life. Some guns are weapons that most think of as weapons of war but are seen and used regularly on our streets. In New Orleans, the recovery of illegal weapons is stunning and sobering. What's worse is this:


In one of the cases, residents called 7th District officers to a location on Curran Road near Read Boulevard, where two teenagers were seen carrying an AK-47 assault rifle through a playground.  The boys were just 13- and 15-years-old.  No one was hurt, and police arrested the teens and an adult bystander who allegedly tried to help the kids ditch the weapon.

A 13 and 15 year old with an AK 47 assault rifle on a playground? Are kids practicing up for that time when they might mow down a bunch of their friends, or maybe their teachers or perhaps a few relatives? Where are the adults in the room? Some adults are out practicing their skills for war games or fighting against their own government. No wonder kids think it's O.K. to carry assault rifles around with them. Where is common sense?

And finally, we need to do more to support our veterans and active duty military here at home. Sadly, the suicide rate of veterans and active military members is on the rise. And what are we doing about it? See my previous blog for the NRA's opposition to military attempts to keep veterans from shooting themselves. In real life, I have provided examples of these suicides. Here is yet another at an Occupy encampment in Vermont.

Deputy Chief Andi Higbee told reporters the shooting raised questions about whether the protest would be allowed to continue.

“Our responsibility is to keep the public safe. When there is a discharge of a firearm in a public place like this it’s good cause to be concerned, greatly concerned,” Higbee said.

Firearms, for whatever reason, don't belong at any mass gathering. Tragic incidents, like the one above, can cause loss of life and endanger many. Our veterans need our support. They have been through things the rest of us could not imagine. We need common sense measures to support our troops and our veterans who are at risk because of their experiences during their service to our country.  Recognition of their emotional and physical struggles is important.  Please thank a veteran today.