Stupid and dangerous, back again; this is what I'm talking about 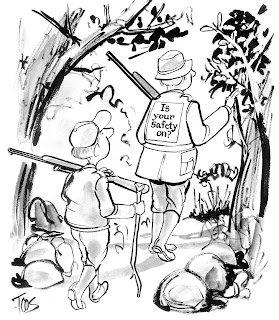 I haven't done a "stupid and dangerous" post for a while. But when so many incidents about gun deaths show up in one day, it's time to resurrect it. So, here, again, is a fine example of why people who are drinking should not have guns. A Minnesota man killed his own son in the early hours of the morning after having 6 Rum drinks. Senseless.

And yet another shooting or two committed by a woman against her ex-husband and her boyfriend in two different locations. This Minnesota woman must have had more than a few grudges. She also had a gun so she could act on her grudges. That's the problem. Guns are dangerous.

No one dead in this one but a young Minnesota woman is in a whole lot of trouble for shooting a man in Superior, Wisconsin.

A Duluth man was convicted of murder after shooting a man during an argument. He tried to get away with murder by saying that he didn't intend to shoot the man but the gun just went off. Right. I've heard that one before.

Cobenais, 27, was accused of drawing a gun, cocking it, holding it to Highler’s head and pulling the trigger during a party at his West Duluth apartment on Aug. 26, 2009.

Cobenais claimed he was using the gun to wave Highler out of his apartment after Highler insulted the mother of his child. He said the gun accidentally discharged when Highler hit his arm, killing Highler.

Sometimes it's true that guns discharge when dropped. I just wrote about that in my post about Plaxico Burress.  Often, the comments from the gun rights folks here on this blog assert that guns don't just discharge on their own. They tell me that someone has to pull the trigger. In this case, I guess they are right. This guy surely pulled the trigger here and the jury agreed.

It's the first week-end of deer hunting in Minnesota. The weather is fine- sunny, calm, close to 50 degrees. So I wish happy hunting to all of my Minnesota readers if they go out hunting. My brother is out with his friends at a deer shack outside of Duluth. Two nights ago when coming home after dark, two bucks were bedded down in my back yard for the night. I didn't want them spending the night there because they have been eating my plants. So I flashed my bright lights at them and they got up and left. No doubt they were back because there were fresh droppings and a few more plants eaten. If hunting were allowed within the city limits, someone could shoot their Buck in just a few minutes right in my back yard. And stay safe out there. Don't do anything stupid or dangerous. Every year there are accidental shootings during deer season. Let's hope there are few of them this year.

So my readers often ask me why I post articles about shootings and gun incidents. I do so because many of the gun rights extremists don't seem to be bothered by these shootings and the number of victims of shootings. Their answer is to just have more guns to shoot the shooters. I don't happen to agree with that. Nor do the majority of Americas polled year after year after year. To me, it is just plain common sense that reasonable restrictions on who can carry guns, where they can be carried and the types of guns that can be purchased and carried should be no-brainers. That, of course, is not how it works in the real world of out sized influence of the gun lobby on our politics. ( see my post from yesterday) You can read right here on this post that I am not opposed to hunting. Most hunters are not opposed to reasonable gun restrictions. So there is agreement out there in gun world. Let's work to enact laws that will keep us safer. Let's work on communities where reasonable people can own guns for hunting, recreation and self defense but unreasonable people will have a hard time getting their hands on guns. Let's work for communities where people realize that having a gun around can be dangerous in some situations and too easy to use in conflicts. Let's work for communities where we make it harder instead of easier for felons, domestic abusers, adjudicated mentally ill people, gang members, drug cartels, kids and terrorists to get their hands on guns. Let's work for a world where unreasonable people are not amassing weapons to use against their own government or even elected officials as in this article from Media Matters:


The federal government has alleged that four Georgia militia members who are accused of plotting to kill federal employees modeled their plan on right-wing blogger Mike Vanderboegh's online novel Absolved, which depicts underground militia fighters who declare war on the federal government over gun control laws and same-sex marriage, leading to a second American revolution. Vanderboegh is not alone in promoting such insurrectionism: several right-wing media figures, including other gun rights bloggers, have suggested the possibility of political violence or revolution as a  means of responding to progressive policies.

The "insurrectionists" featured in the linked article above are not only unreasonable people; they are dangerous and scary people who should not have guns.  But have guns they do and it appears that they have questionable and illegal intentions for those guns. These are not the average deer hunters who are out in the woods enjoying the hunt and the unseasonably beautiful Minnesota weather. These are insurrectionists. This is not the kind of world we want. ( please read more of this article to see what some gun rights extremists are up to) Haven't we just been fighting against insurgencies in other countries? We don't need our own.