The guys with the guns sometimes kill innocent people 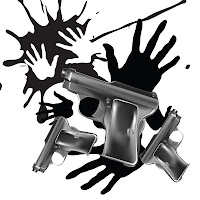 This article is a perfect example of why guns on college campus bills are ridiculous and backwards thinking. At this North Carolina campus a man with an assault rifle was walking around the campus. Was he law abiding? How would anyone know if many are carrying guns around? Remember, the NRA and its' minions think that any kind of gun should be carried openly as well as concealed. Conceivably, if they had their way, this guy could have been a legal gun permit holder walking around. But people generally do not think someone walking around with a gun will keep them safer. Guns are dangerous. Guns kill people. It happens every day. The natural reaction is to run away and/or call police. That is what  happened in this case. College security shot and wounded the man who is now in custody.They kept the students safe. Someone with a gun permit may have missed or become the victim themselves, not being trained in confronting a guy with an assault rifle.

According to a statement by the university, campus police officers on foot patrol had seen students running from the back of the campus. They reported to the officers that they had seen a man carrying a rifle, the statement said.

Jereka Bandy, an 18-year-old freshman who lives in University Towers, said she's disturbed by the incident.

"It's crazy to think someone had a gun like that on campus. It freaks me out," she said.

Other students said they were impressed by how quickly campus police responded.

Common sense tells us that the guys with the guns sometimes kill innocent people. They shouldn't be allowed to make the rules. There are bad consequences when they do. In this case, campus police have someone in custody who will now never be able to own a gun again. They stopped him from using his gun to kill innocent people and they reacted quickly to a very dangerous situation as they are trained to do.

I just happened upon this article about a Halloween shooting in New Orleans. Once again, a felon obtained a gun from somewhere- stolen, straw purchase, gun show? Further, he also obtained a high capacity magazine for that gun. If the guys with the guns were not making the rules, this would not be possible in America. We would stop the sale of these kind of magazines and it would surely make it much more difficult for guys like this one to get their hands on them. Why make it easy?


Long a target for anti-gun advocates, including the Brady Campaign to Prevent Gun Violence, extended magazines have been used in several high-profile mass shootings, including the January attack in Tucson on Rep. Gabrielle Giffords; the killings in 2009 at Fort Hood, Tex.; and the 2007 slaughter at Virginia Tech that left 33 dead.

As long as the guys with the guns make the rules, these types of shootings will occur.
If you agree with me that the guys with the guns should not be the only ones making noise about gun laws, contact your elected officials and tell them we can do better. Tell them that common sense gun laws can stop some of the violence occurring every day in our communities.
Posted by japete at 6:38 AM