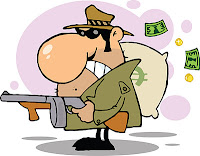 Requiring background checks on all gun sales is simple. Federally licensed firearms dealers are available at gun shows or close by in a near town or city. Some people like to sell their guns to family members. So be it. There are often exclusions for family members in proposed bills. But you had better make sure that your brother-in-law is not about to shoot your sister because they have been having marital problems and he is sort of a volatile guy. Maybe you should make sure that your father doesn't have any sort of health problems that could put others at risk if he misuses that gun. Suicide, for one thing, is prevalent among older adults. Some older adults have arthritis, sight problems, dementia and other conditions that would make handling a gun a risk to themselves and others.

What I don't understand is the strong resistance to requiring background checks on all guns sales. It would be one way to put a stop to illegal gun trafficking. It might stop a murder or a suicide. It might stop a kid from buying a gun on the street from someone who just bought without a background check with the intention of making a quick sale. If the folks who so strongly resist this are law abiding gun owners, what do they have to fear? There is no slippery slope to background checks. After all, they are already required when buying guns from federally licensed dealers and nearly 2 million people who are prohibited purchasers have been prevented from buying their guns at a particular point of sale. It's just plain common sense. This new comprehensive report from Mayors Against Illegal Guns highlights the problems in our country and in individual states with the gun background system. It needs to be fixed.

New York City Mayor Michael Bloomberg knows that requiring background checks will save lives. He will be speaking in Congress today about how fixing our background check system is a good idea. There will be victims of gun violence standing beside Mayor Bloomberg. One woman from Minnesota, Mary Johnson, who will be there lost her son to a bullet several years ago. Her remarkable story is here. She will visit with members of Congress, along with other victims, to tell them that a simple vote can save lives. She will ask them to stand with the victims instead of with the NRA. It will take courage and conviction for members of Congress to do this. But we know they want to do the right thing. Up until now, they have been intimidated by the guys with the guns who think they make the rules.

Omar Samaha, whose sister, Reema was shot to death in the Virginia Tech massacre, knows that a simple law to fix our background check system would work. He will be at the Senate hearing today. He traveled the country with the FixGunChecks truck for Mayors Against Illegal Guns. Here is his video.

As if allowing felons to purchase guns easily at gun shows isn't enough, the NRA is even into quietly making sure that felons get their gun rights back. Seriously folks. Where is common sense? This is ludicrous and dangerous. In this story, there are references specifically to Minnesota gun laws. Apparently the NRA will stop at nothing to get what they want. They managed to get a provision in the law that most people don't even know exists. If your ideas can't pass public scrutiny, they shouldn't end up in laws. You can watch a video here, of a Duluth woman who was endangered by her former boyfriend, a felon, who got his gun rights back. If the flawed and dangerous idea to give guns to domestic abusers and felons is such a good idea, let it see the light of day for discussion. If that had happened, it would not have passed in the Minnesota legislature or in other states where provisions such as this were sneaked into other laws. And now we have a law that allows even violent felons to get their gun rights back. I would suggest that our political and judicial system is full of flaws that need to be examined carefully if we really care about public health and safety. Further, felons have been shown to repeat crimes once out of prison and allowing them to have guns after their release is a bad idea for so many reasons. Read what Daniel Webster of the Johns Hopkins Bloomberg School of Public Health has to say about the issue:


Given the prior data on the enormous social costs of gun violence in the U.S. ($100 billion a year, by one estimate), criminal recidivism, and public opinion, people convicted of nonviolent felonies should be eligible for review of their fitness to possess firearms only after a substantial period of crime-free living (like 10 years), including no history of restraining orders for domestic violence. The review should also involve an in-depth examination of the individual’s mental health and history of substance abuse.

Of course. Can there be any arguments against this reasonable and safe approach to the issue? One would hope that our elected leaders realize that they have been fooled by the ever powerful NRA. Speaking of being fooled by the NRA, on the same day (today) as the Senate Crime sub committee will hold a hearing on the Fix Gun Checks Act of 2011, the House of Representatives will vote on H.R. 822 to nationalize conceal and carry permits so that states will be forced to honor permits from any state even though the laws are very different for who can get a permit. This law is dangerous and goes contrary to common sense. Many of our Congress members are beholden to the NRA or just plain afraid to stand up to them. Not all permit holders are law abiding citizens as the NRA would have you believe. Here is just one recent incident of many where permit holders commit gun crimes. And further, from the linked New York Times article above some felons who get their gun rights back also then get permits to carry.

In the end, the judge, Hollie L. Gallagher, granted his petition without comment.

Soon after the judge’s ruling, Mr. Hairston obtained a concealed weapons permit from a neighboring county and bought a 9-millimeter semiautomatic handgun.

This is ludicrous on so many levels. And what do or what can elected officials do about this?

When Senator David F. Durenberger, a Minnesota Republican, realized after the law passed that thousands of felons, including those convicted of violent crimes, in his state would suddenly be getting their gun rights back, he sought the N.R.A.’s help in rolling back the provision. Doug Kelley, his chief of staff at the time, thought the group would “surely want to close this loophole.”

But the senator, Mr. Kelley recalled, “ran into a stone wall,” as the N.R.A. threatened to pull its support for him if he did not drop the matter, which he eventually did.

“The N.R.A. slammed the door on us,” Mr. Kelley said. “That absolutely baffled me.”

I'm baffled. You should be, too. We deserve answers to how these things continue to happen in a country already awash in guns and with more gun deaths per capita than any other industrialized country. Let's end with this quote from the New York Times article linked above:

Even some felons who have regained their firearms rights say the process needs to be more rigorous.

“It’s kind of spooky, isn’t it?” said Beau Krueger, who has two assaults on his record and got his gun rights back last year in Minnesota after only a brief hearing, in which local prosecutors did not even participate. “We could have all kinds of crazy hoodlums out here with guns that shouldn’t have guns.”