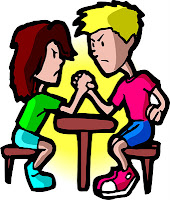 Really. Some days you wonder what kind of people make up the heart and soul of America. This is one of them. I wrote about the Texas permit to carry instructor who ran radio ads saying he would not give lessons on carrying guns to Muslims or Obama supporters. Now he is under investigation for his remarks. I guess in Texas, anything goes:


Tina Hoffman, a real estate broker, described Mr. Keller as a local character who enjoyed stirring up controversy. “I thought it was kind of harsh,” she said. “But that’s just Crockett. You got to know Crockett. I don’t think that’s the flavor of our county. This is a very prayerful community.”

Questions need to be asked. Does this man get away with his remarks because he is "just Crockett"? What does being a "prayerful community" have to do with anything? Is it O.K. to get away with racist and inappropriate public remarks just because you go to church and pray?

And do the Republican members of the House Oversight and Government Reform Committee continue to get away with their witch hunt concerning the ATF's  "Fast and Furious" program? Should we let Senator Grassley get away with his distracting statements about the program that deflect the need for real change? Is this the ubiquitous "boys will be boys" argument? Can the gun lobby continue to use their flawed argument that stopping the Mexican drug cartel from getting their guns in the U.S. will naturally lead to gun confiscation of American gun owners? Can Rep. Darrell Issa continue to get away with his line of thinking that preventing the Mexican drug cartel from getting assault rifles will allow Americans to own and bear their arms in case of needing them for use against their own tyrannical government? ( scroll to the end of this link for Issa's recent words) Should we just let Congressmen be Congressmen?

I think it's time for a new look at the distraction of the NRA's extreme statements and how it affects gun policy in the U.S. You just can't make things up as you go along to justify your point of view if it is not based on facts and reality. There is no doubt that American guns are contributing to the deaths of innocent Mexican citizens. What do we do? Distract and distort the facts. From the New York Times editorial linked above:


Mr. Breuer said in the past five years, 94,000 weapons have been recovered in Mexico and 64,000 were traced to American sources. “We need more tools,” he said. To which Senator Charles Grassley, Republican of Iowa, predictably responded, “The answer isn’t to clamp down on law abiding-citizens or gun dealers.” There is no problem with law-abiding citizens. It’s Congress’s failure to ban sales of assault weapons that is feeding the drug wars.

It also tells us that those of our elected officials who've allowed NRA self-preservation to take precedence over public safety considerations are complicit in criminal acts of violence that target children.

Legitimate, federally licensed dealers who record purchases, do background checks and provide the ATF with the information it needs to trace guns concur with Cleveland police that private sellers should be brought under the same mandates as licensed dealers.

Until that happens, it's time to expose the NRA for what it really is: a front for illegal gun sales.

Where is common sense? Letting boys be boys and the NRA be the NRA is just not working.