Be safe on Thanksgiving 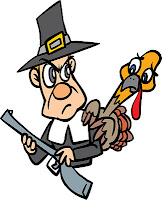 It might be time for another "stupid and dangerous" post. There's no telling who will decide to become unsafe and potentially dangerous on this Thanksgiving.  Here's the first incident of a supposedly law abiding citizen who suddenly wasn't:

Neighbors said Malone, his wife and their grown daughter kept to themselves and lived protected, regimented lives. Malone often wore camouflage pants and a military-type jacket and patrolled outside the building, said caretaker David Spriggs, who lives down the hall.

He would also stand outside his apartment at attention for two to three hours, never breaking his stance, Page said.

"He was a little weird," Brown said.

Really, should we suppose that someone like this is a normal person? And given the fact that we have a culture that promotes guns and gun use in our country, anyone, even someone like this guy can legally buy and own guns. There are some scary folks living amongst us who pass for law abiding citizens with crazy ideas. Crazy ideas are one thing. But combined with guns, those ideas turn into dangerous ideas.

This story about multiple shootings in Sacramento reminds us that our country is sometimes at war. When 9 people are shot with one death from separate shootings in one place, what other conclusion can be reached?


Petit said there was no connecting story line for the abnormally busy night: The incidents were unrelated; they didn't represent a series of gang retaliations; it wasn't a full moon.

Maybe it's just that too many people have guns who shouldn't have them and even those who are legal use guns in arguments or when angry or drunk. That's the real story line.

If you've been awake in the past week, you know that a crazed man with even more crazy ideas, has been arrested and charged with the attempted assassination of our President. Here's a man who should definitely not have guns. But, of course, our country allows just about anyone to walk around with guns. Ortega-Hernandez didn't just have any gun. He was carrying an AK-47 knock-off in his car.


Hernandez used a cheap but powerful Chinese- made assault rifle when he fired shots at the White House. His SKS rifle carried rounds high-powered enough to crack a bullet resistant window, even after traveling one-third of a mile from Constitution Avenue.

Read here about why weapons of war like the rifle used by Ortega-Hernandez should not be available to citizens in the legal or illegal gun market. No one is safer when just anyone can buy and carry these sorts of weapons around with them. But the NRA made darned sure that this is possible. Their bought and paid for members of Congress allowed the Assault Weapons Ban to lapse in 2004. Now we have even more of these sorts of guns around and readily available to nut jobs like Ortega-Hernandez whose intentions for those guns are not for self defense. Of course, one doesn't need a gun like that for self defense anyway but don't tell that to the gun rights extremists who are convinced that they just can't get along without those weapons. I mean, maybe you are just going to visit family this Thanksgiving. Surely you will need your AR-15 or your Glock. You never know when a crazy uncle will decide to attack you after having a little too much wine and under the influence of Tryptophan. I say, just shoot him. That will take care of things just fine.

So back to the assassination attempt on the President. When people with assault rifles are roaming the streets of our nation's capitol will citizens be safer? How is it that some of those bullets didn't hit a visitor to the White House? When I am in Washington D.C. I often walk to the White House and other monuments. There will be a lot of people traveling into and out of Washington D.C. this holiday according to this article. People may or may not be safer where they find themselves over the holiday. I will be traveling to the Philadelphia area with my son's family to visit my daughter and her family where we will have Thanksgiving together for the first time in several years since she moved to Pennsylvania from Minnesota. No one in my family owns a handgun nor do we see a need for one. It doesn't even enter our minds that we should take a gun with us when traveling around the country. The gun rights extremists think differently. I remind my readers that those who carry guns in this country comprise 2-3% of eligible adults. For them, Congress is willing to endanger us all. There are potential consequences to allowing people who shouldn't have guns, who some states don't bother to prohibit, in public places. Those who just voted in favor of H.R. 822 are apparently not thinking of the actual consequences.

Speaking of potential shootings, Thanksgiving day is no different than any other. In America, 34 people a day die from gun homicides. So what's another day? We all know that America is awash in guns and until we decide as a country that we won't continue to accept this daily carnage, the numbers will likely go unchanged. Other industrialized countries not at war, of course, don't accept that 34 people a day will be murdered by guns. So they have passed reasonable and common sense laws that make sure that doesn't happen. Other countries don't have the NRA. Other countries understand that public health and safety is more important than the profits of the gun industry. In fact, some countries also have gun manufacturers but they don't have a gun lobby exploiting the businesses to further their own political power and control. Don't you wonder how people live their daily lives having to  strap on holsters and carrying guns around with them everywhere they go?

From the linked article above, we find that Belgium, Germany and Austria produce guns such as Beretta, Hecklar&Koch and Glock. So the rate of gun murders in Belgium is about .42 per 100,000. In Germany, the rate of gun murders is .23 per 100,000. Let's look at Austria where the gun murder rate is .22 per 100,000. America gets the prize for having 2.98 gun homicides per 100,000. So having a gun manufacturer in your country needn't mean that the citizens of your country end up shooting each other in great numbers. The U.S. is a great country in so many ways. But it can't be said that we are a role model for other countries when it comes to killing our own citizens. We have no common sense when it comes to gun policy.

See below for shootings on Thanksgiving in previous years:

Happy Thanksgiving everyone. Stay safe and try going gun free. I won't be posting for the next week due to my out-of-state travel. See you all after Thanksgiving.