Support for my points 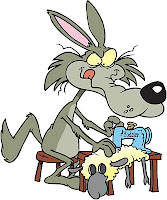 I know, I know, the gun rights extremists who peruse ( or troll) my blog just love to criticize and insult me and let me know that I am wrong and they are right. They offer all kinds of ridiculous and irrelevant notions as distractions from the main issue. They are trying valiantly to make us all think that H.R. 822 would not really change much. Really? Then why do they want it so badly. This is the "wolf in sheep's clothing" argument. Nothing will hurt you, my dear. Trust me. If the NRA didn't think this bill would make significant changes to our gun laws that would benefit the 2-3% of people who think it's necessary to carry their guns with them on all of their outings, H.R. 822 would not be pushed so hard. Indeed, it will change gun laws and make us less safe. I've gone over that many times before.

Others are not buying this ruse either. Here is a great parody about the bill. I love the video clip from the old Western T.V. program, Have Gun Will Travel. The song was so catchy that people ended up watching the show just to hear the song. (Note to the gun rights extremists-"A man of morals and conscience, he would at least try to settle a dispute without violence whenever possible. He occasionally would even turn on his clients, if he felt they were in the wrong". ) This, of course, referred to Paladin, the hero of the T.V. show. But have "gun will travel" is what H.R. 822 is all about.


The usual pests are opposed to this law. Gun violence victims. Mayors. Attorneys General. Chiefs of police. Frank Bruni. But the real resistance came from gun owners who looked deep within this law and saw the UN-New World Order-Obamafascist implications of it. These people saw HR 822 as opening the door to federal gun registration, and to the establishment of "minimum federal standards" for gun permits, and to the general meddling of the federal government in the rights of all Americans to stick their gun down their pants and go to the Piggly Wiggly.......

For the convenience of a very small group of gun nuts in our country, we should compromise public safety? I don't think so. And neither does Frank Bruni, editorial writer for the New York Times ( Have Glock Will Travel). This, too, a parody on "Paladin" :


Contradiction, hypocrisy: those words rush in ahead. The bill thus far has more than 200 Republican co-sponsors in the House, many of them conservatives who otherwise complain about attempts by an overbearing federal government to trample on states’ rights in the realms of health care, tort reform, education — you name it. But to promote concealed guns, they’re encouraging big, bad Washington to trample to its heart’s content.

Imagine how apoplectic they’d be if, on certain other matters, Washington forced their states to yield to others’ values the way this bill, H.R. 822, would compel New York, Massachusetts and Connecticut to honor more permissive gun-control regulations from the South and West. As it happens these three Northeastern states all perform same-sex marriages, which more conservative states do not have to recognize.

H.R. 822, now in the House Judiciary Committee, makes a mockery of our diverse values and strategies for public safety. If it were enacted, off to New York the South Dakotan tourist could go, 9-millimeter Glock in tow.

And just as the bill is contemplated, this, from the Violence Policy Center:


"Congress is simply ignoring the mayhem created by lax concealed handgun laws. Since the last Senate vote on this lethal proposal in July 2009, concealed carry permit holders have killed at least another four law enforcement officers and committed at least another six mass shootings away from their homes. And these anecdotal incidents are only the tip of the iceberg since the gun lobby consistently blocks any attempt to collect comprehensive data on crimes committed by permit holders. Congress simply looks the other way and does the bidding of the gun industry while innocent victims--including children--pay with their lives."

The bill (H.R. 822) would override the laws of almost every state by forcing each to recognize concealed handgun carry permits from every other state--even if permit holders would not be allowed to carry or even possess a handgun in the state they are visiting. The effect would be to force states with strict permitting standards to recognize permits issued by states with weak standards. In the real world, this would even allow people planning mass shootings to freely travel interstate while armed, with local law enforcement powerless to intervene until the shooting starts.