Hypocrisy as far as the eye can see.... 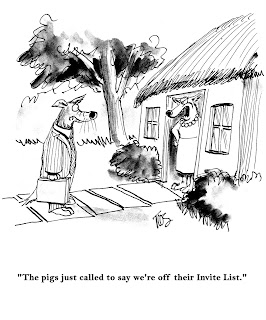 It would be laughable if it weren't so sad. When legislators tout new gun laws that are less restrictive by claiming that all will be fine and no law abiding gun owner will violate the laws, don't listen to them. They may be the very people we should be afraid of after the laws are passed. Such is the case of this Tennessee legislator who has "egg on his face" and more after being arrested for drunk driving the other day. Further, a loaded gun was found in his car. But hey, just trust those law abiding gun permit holders. They will do no wrong. They won't drink in bars, of course. They won't carry their guns while drunk, of course. Of course. Really folks, these law makers need to be called out for their own dangerous and seedy behavior. They are the ones making the rules for the rest of us. The larger question here is how and why they get away with their hypocrisy? Could it be that the gun lobby is just so effective and so feared that even when a law makes no sense, such as allowing guns in bars, it happens anyway? I and others have been writing about the members of the board of the NRA and their own questionable relationships with gun dealers, gun manufacturers and others who make sure that gun policy decisions benefit them. The new Meet the NRA website has been exposing the NRA of late and it is not a pretty picture. But the NRA is one of the most powerful lobbies in Washington D.C. They are feared by some and their game is dangerous.

Really there is enough hypocrisy and cynicism here to last a lifetime. And so, when a gun rights extremist cries you the blues about rights being taken or guns being taken, they are "crying wolf". These are the same folks who rail against the government and who need their guns in case of a tyrannical government. And yet, they have managed, in their capacity as the 2%ers to get gun laws passed that benefit them to the disadvantage of the rest of us. They have taken advantage of "the government" they hate by getting the government, in the form of state legislatures and Congress, to do their bidding. The government is mighty handy when you need it. Because of course, as the linked article above reveals:


But supporters like GOP state Rep. Curry Todd would not be swayed, and insisted that allowing guns in bars was an "issue of personal safety." Last night, Todd was arrested while allegedly driving under the influence. He had a loaded handgun "in a holster stuffed between the driver seat and center console."

Personal safety? Is he kidding? Apparently the other Tennessee lawmakers believed this guy. Whose personal safety is more at risk when guns are allowed to mix with alcohol? The other 98% of people who do not carry their guns around in public places. See this local story as more proof that guns and alcohol are a dangerous mix ( though I have provided enough proof many times in this blog).


According to the criminal complaint, Koski said Martinson emptied his pistol twice, and he could hear a handgun being reloaded after six shots. He said he heard Martinson and another man yelling: “We’re going to get you (expletive deleted.) … You’re going to die tonight. … You’re ours.”

Wow. He was "loaded for bear" literally. Not only was his gun loaded and reloaded, but he was loaded with alcohol in his system. I would say that Mr. Koski is a very lucky man today. And Mr. Martinson will rue the day he got out his gun in a drunken state. His life will never be the same. Common sense never happens when guns and alcohol go together. But facts don't matter to the folks who think guns in bars are a case of personal safety. Facts don't matter when the NRA backed members of Congress push, as they will today, for H.R. 822 that will bring guns into bars all over the country even in states that have laws against it.

And so we have a 2% solution looking for a problem. There is little, if any, documentation showing that a loaded gun carried by a permit holder will make us safer in a public place. But logic is not a strong suit here of the game played by the NRA. Paranoia and fear reign. If a law can be passed to benefit the 2%, it is likely to happen. If a law can be passed to benefit the gun dealers and manufacturers who put profits ahead of safety concerns, it is likely to happen. These wolves are very clever. They are couching their own personal fears and paranoia and desire to normalize this kind of behavior in language of personal safety. Don't believe them. Where is common sense?
Posted by japete at 6:49 AM