Will police officers protect you? 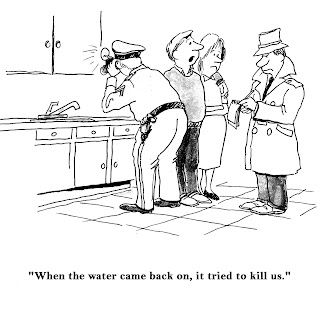 Recently there was a ridiculous exchange on my blog about whether or not a police officer's job is to protect the public. It is commonly assumed that this is the case. And yet, the "gun guys" who comment on my blog have provided me with websites and court cases to show that it is not required in the law that a police officer must protect you, as a citizen. Here is a good description of the duties of a police officer. If I went out and interviewed people on the streets of my city, these would be the duties they would surely mention. So, along that line, I decided to do a very unscientific poll by asking some of my friends by phone and by Facebook what they thought the duties of a police officer are. Here are the results: The top 3 duties of police officers were: Preserve public safety, protect the public, and upholding the laws of the municipality. Some included all of the choices in an "all of the above choice" which added: keeping the peace, helping people in need of assistance, and encouraging a civil and respectful society. I asked several retired police officers and the County Attorney in my area who agreed with the above opinions of other citizens asked in my small and informal survey.

The reasoning of the gun guys on my blog, if any, is to justify having guns in the home for self defense and carrying them wherever you go. Since the job of the police is not to protect you, you need your own guns. This self serving and circular argument is false. I'm sure I don't have to provide you with all of the times officers are shot in the line of duty while protecting citizens from each other or themselves or protecting the community from a dangerous situation. There was even an exchange about whether police should have arrested two guys who decided to float down flooded Philadelphia area streets in a raft during the aftermath of Hurricane Irene. As proof, he linked to this article. Check it out.


Here are some of the remarks about police officers and whether or not it is their job to protect citizens:

And thus went the back and forth with my countering these statements. I have great respect for police officers, Chiefs and Sheriffs. I have known many of them through my work in the area of gun violence prevention. All of them have been supportive of my efforts to get sensible gun legislation passed and speak out to prevent gun injuries and deaths. They have spoken at events and rung the bell in our memorial bell garden ( see photo on this blog) for fallen officers. I know that some of the "gun guys" on my blog just do not like the police and are particularly suspicious of and derogatory towards the Chiefs in particular. That seems to be because Police Chiefs tend to agree with my positions rather than those of the gun lobby. Most recently, I posted that the Minnesota Police Chiefs Association and my local Police Chief sent letters to the Minnesota Congressional delegation in opposition to H.R. 822, the National Right to Carry Reciprocity Act Packing Heat on Your Streets Act. Would that our Congressional leaders respect the position taken by police officers and Chiefs since they are the ones who will have to deal with the permit issues and trying to figure out who is a valid permit holder or from where they come. But the gun lobby doesn't care about such issues since all they want is to have an unfettered right to carry their guns around wherever they go just in case. I wonder how the majority of us who don't carry loaded guns around all the time survive? And why does Congress ignore law enforcement?


This video with Brady Campaign Acting President Dennis Henigan, about the H.R. 822 hearing at the House subcommittee last week, shows that police are generally opposed to unneeded gun bills such as H.R. 822. ( By the way, here is another example of the gun lobby's hypocrisy - the state laws for conceal and carry were passed by state legislatures, often in opposition to local law enforcement. Now we have the laws and, for better or worse, are living with them. Why not just enforce the laws already on the books and let the states decide what they want in their own states? The laws are working and a federal law is not needed.) But the gun lobby uses the argument about States' Rights and enforcing laws already on the books only when they want to. Otherwise, I guess their talking points don't apply.


We should be supporting the efforts of law enforcement rather than discounting them. As in any other profession, there are bad apples. Police officers have been found to be corrupt and accused of using too much violence or of racial prejudice. Naturally we all find these things to be abhorrent, just as we do when a doctor, lawyer, Mayor, Senator, Congressman, teacher or anyone else is found to be guilty of wrong doing and corruption or other unacceptable behaviors. But since police officers put their lives at risk every day in their profession, which many other professionals do not , we owe them a modicum of respect. There are efforts to help officers keep the public even safer. Isn't this what we pay our officers to do? They are important to our communities and most especially, to public safety.

Read here a commentary from the mother of a woman shot during a confrontation after police chased a robber to her daughter's home in Duluth. In her words: " To the law enforcement officers who put their lives on the line every day, from the chief of police to officers who carry out community patrols, thank you from the bottom of my heart for saving my daughter’s life. Duluth is fortunate to have an incredible police force led by one of the best police chiefs in the country." And following this article, you can read the account of the incident here and the findings of the St. Louis County Attorney about the incident. Here are the words of Duluth Police Chief Gordon Ramsay, " Ramsay said Wick acted to protect his own life as well as others’. “We don’t pay police officers to take a bullet,” he said." This was a clear case of justifiable homicide on the part of the police officer who was acting to protect himself and the people inside of the home. Common sense tells us that law enforcement officers are integral to community safety, security, protection from harm, peace and justice.