Have we gone gun nuts? 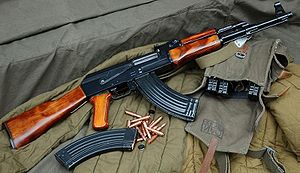 What in the world is this all about anyway? A Florida company is trying to convince potential customers that they just must have an AK47 for their business, because, you know, er..... just because. But first, you must sign on to do business with them. Get your voucher for this lovely gun so you can feel safe while doing business. I couldn't help but look at the comments on this article. There were several which said what I'm feeling much better than I could have done myself:


Yes, when it comes to guns this article does point out the way in which this country has gone "round the bend". If it weren't for the fear and paranoia propagated by the gun lobby, this sort of thing would not be considered seriously. Anyone with common sense would realize that storing an AK47 for business protection is a totally ridiculous idea. But then, common sense is not what this is all about. Apparently it's about rights. The article links to this "No Merchant Victims" website. So I clicked on the site and was met with this little ditty playing as soon as I clicked. Here's the first verse:

Now, I don't know about your Bible, but my "good book" says nothing about gun rights. In the third verse of this ridiculous ditty, the Good Lord is invoked. Really folks, what is this nonsense? Are there people who believe this stuff? On what planet are they living? What does the ditty about rights and the Good Lord have to do with running a business? What kind of sick society are we living in to accept that something like this is O.K? Guns for business- even trade. The gun dealers and manufacturers benefit. No Merchant Victims  benefits. The business owner benefits, unless of course something goes wrong and that AK 47 happens into the wrong hands. Then, instead of the merchant victim we will have actual victims- dead people, that is.

From the PR Newswire release by the company about this fabulous deal, the company admits that the chances of being robbed are really low, but you should be prepared just in case. So why the need for an AK47 then? Because, it's simple, "I've got rights." Listening to the song again, I am reminded of how this could be used as a routine on Saturday Night Live. I can picture it now- a man, for it's usually a man, walks into a business with his hand in his pocket. He says he has a gun and he wants money. The clerk behind the counter pulls out the AK 47 and blasts the guy until he's quite dead all the while singing, "I've got rights." Of course, in real life, things don't and won't likely work out quite so well for either party but we are not dealing with the real world here. This is a world where some people think that their gun rights come straight from the "Good Lord" and that they can do whatever they want with their guns because "they've got rights." Where is common sense?
Posted by japete at 2:03 PM