Yesterday, the families of the Norway terror attack went to Utoya Island to visit the exact place where their loved one took his or her last breath. It must have been an unbelievably emotional time for all concerned.They left flowers and candles in memory as Norwegian citizens had done in downtown Oslo after the attacks. I know how this is. When a loved one is shot to death, it is such a shock because of the suddenness and violence involved. It feels like you, yourself, are violated. I was surprised that the Norwegian government allowed the families to visit the scene of the shootings. Perhaps it was because it was such a horrendous act of national violence. I am not sure that would happen in this country. Usually sites of murders become crime scenes with no one allowed to enter. We could not visit the place where my sister was murdered. It was at her estranged husband's home where she and her friend had gone to deliver some papers to him. It was there that she took her last breath. I had been to the house once after my sister left him so I could imagine the scene. But I couldn't imagine the horror that took place inside. 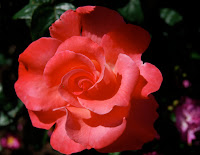 When people are shot in the head and chest, it is a terrible sight. I couldn't bear to view my sister's body before she was cremated. But my mother, many years older than me, who lost her first husband to a bullet, went to see her oldest daughter lying with bullet wounds to her body. She left a rose on her body just as we did on my mother's own casket when she died last November.

Months after my sister's murder, the man who took my sister's life killed himself. It was only then that we got to meet with the local Police Chief, my brother-in-law's divorce lawyer, a Psychiatrist, a Victims' Advocate, the County Attorney, other attorneys and the families of my sister's friend. The case was closed. We could now know the details that would have come out in a trial when the case went to court. It was gruesome. I will never forget that day. I wanted to know as much as I could about what was going through my brother-in-law's head when he pulled the trigger at least 6 times as he killed 2 innocent people. I learned a bit about what goes through the mind of a murderer. He was a man I used to like. He was married to my sister. He wasn't capable of this awful crime, was he? We will never know it all. And maybe that's O.K. If we knew it all, it would be harder to carry on with our lives after such a loss.

Anders Breivik has supposedly been helpful to law enforcement, but unrepentant. And oddly, much like my ex brother-in-law, he is interested in his public image post murder.  "Breivik's lawyer said his client was concerned about appearing smart and respectably dressed for Friday's  court appearance, state broadcaster NRK reported." It doesn't matter, of course, to anyone else. But there is something about the narcissism of murderers that is fascinating and dangerous. Their actions put them front and center in the media and in Breivik's case, news media all over world. Perversely, that is where they want to be. There is little empathy for the victims. It is almost as if they are in a different place in their heads than in their bodies while committing these awful acts. That is how it is often described.


Breivik, like my brother-in-law, had a point to prove. Or at least, that is how they viewed their acts. A gun can certainly prove a point. Guns can provide ultimate control over people. When you point one at someone, they can't really hide and they know that if they run, a bullet travels a long ways and will find them. It is why people fear guns when they see someone with one in public. Who knows if a bullet is meant for them? Common sense tells us that guns are inherently dangerous when used by the wrong people in the wrong way. They are used too often by people who are not expected to use them- my brother-in-law, for one; Anders Breivik for another. And what do people say when someone like them shoots other people? How often do we hear and read comments from neighbors or loved ones who say that the shooter was such a nice person, or such a quiet person, or the person kept to him or herself and seemed just a little bit odd, or that they might have been angry or depressed but no one could believe they were capable of murder? As long as people like this believe that guns are the answer to some problem or some ideology or to end a divorce or to seek revenge or gain the ultimate power and control over a woman ( as is often the case) we will continue to have shootings like the one experienced by my family and the families in Norway. We need a change of laws, change of culture, change of political reality, and a change of minds of those who believe that guns are not a problem but a solution.
Posted by japete at 7:58 AM