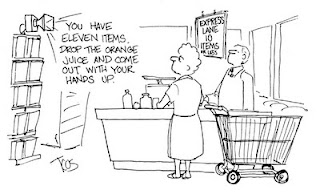 I just knew I could make a list of stupid and dangerous gun stuff this week. I am hoping to do one of these posts every week or so. This one is long because there were so many things to write about, unfortunately. It's instructive for my readers to know how often permit holders are in the wrong and how often stupid things happen with loaded guns in public- and in private. The more guns we have in public places, the more often we will see incidents like the ones I link in my posts. The more permit holders are out there with their guns, the more we will see stupid and dangerous things happening with their guns. So here goes for this week:

1. Why is that people think they can try to take concealed guns on airplanes? This woman was just one of many who have attempted to get guns past airport screeners. Whether the gun was hers or her boyfriends' makes no difference. She had the permit. Perhaps he did as well. Stupid. Where is common sense?

2. Another 3 year old died from a bullet intended for someone else. This California tot should not have been in the line of bullets. That is because there shouldn't be bullets flying on our streets. Are we at war? Collateral damage is just not acceptable. You may remember that I wrote about 2 three year olds who were shot to death in last weeks' stupid and dangerous post.

3. And what can you say about this one? An automatic pistol ( it doesn't look much like a pistol to me) was found in a pool of water used by children in the ocean at La Jolla, CA. The gun dealer interviewed by the reporter wondered if the gun's owner died and a family member didn't know how to get rid of the gun? Or maybe someone bought it and it just didn't suit them? Time will tell as the weapon is traced to find the original owner. Is there a better way to get rid of weapons when someone dies? If someone has a lot of guns and they die, what happens to them? I have a friend who was not interested in the guns his father left behind when he died. He took them to local law enforcement who helped him with the disposal of the guns. There are a lot of guns in our country. What happens to them all?

4. Senseless. That is the word used at the end of this article- a man holed up in his apartment terrifying a Boston neighborhood after killing one man. It turns out that the shooter is a concealed carry permit holder. Really? Another one?

5. I just hate it when I have to keep using incidents of children finding their parents' loaded guns and shooting themselves. This 4 year old did just that. So since I wrote last week about two 3 year olds and I have two examples here of toddlers being shot, one must wonder what in the world is going on? Aren't parents thinking? Too many people have loaded guns in their homes and kids will find them no matter what you teach them.

6. Replica/toy guns look pretty real to the public. This incident points out how people react when they see what look to be real guns in public places. Luckily, of course, in further investigating, it was discovered that it was kids dressed in camouflage clothing wielding real-looking toy assault type guns. Questions need to be asked. Why are there toy guns that look like this in the first place? Why do parents buy them for their kids? I know that little boys will play with guns and even make guns out of anything available. My own son did the same with his friends. He was not exposed to guns in our home except to see my husband go on hunting trips with friends. As it turns out, he was not interested in hunting and so he lost any fascination he may have had with guns.

7. Should an 11 year old who shot is mother to death and shows no remorse get his rights to own a gun back sometime? Here is the story about the boy's hearing at which he asked about his future gun owning potential. The real question is how he got this gun in the first place and what was it that made him want to shoot his mother?

8. This horrendous murder case in Minnesota was settled with the conviction of a man who shot another while stealing his sports car. " "It does assuage a little of the pain, but not a lot. And it was so damn senseless."


A statement by Lor's widow, Katie, before sentencing, told the weight of her grief and that of her young children, whose faces were emblazoned on the hood of the stolen car. "The loss of my husband has changed me as a person," her statement said, read by Fristik. "I feel like the life has been sucked out of me. Each day I force a smile on my face, and have to push myself to be strong for my kids."" Enough said.

9. It turns out that often school shooters, many of them teens themselves, get their guns from someone they know- a relative or a friend. Such was the case in this shooting. A 16 year old Indiana boy was sentenced for the shooting of another student at an Indiana school last year.

10. A new law just went into effect in Mississippi that apparently hardly anyone knew about. Now students can carry guns on college campuses. Or can they? What's going on? Why didn't the Department of Public Safety know about the provisions of the law?

11. Another gun murder/suicide has happened in my home state. This one was yet one more senseless domestic shooting the details of which are all too familiar to me and any family who has suffered the gun murder of a loved one during a marital break-up. Women are frequent victims of gun violence and often by the hand of men in break-ups of relationships. Senseless.

12. What was this "law abiding citizen" thinking when he pulled a shotgun out to kill a police officer who was there to deal with the man's dogs? Who knows? What if the man didn't have the shotgun? Would he have gone after the officer with a knife or a bat? Would the officer now be dead? Why do people think they can just shoot someone when they don't like what the person is doing? When an law enforcement officer comes to a home because of a domestic disturbance, he/she is there officially. Did this man wait to ambush the officer? No wonder officers are so nervous when responding to domestic disturbances. People with guns in those situations are very dangerous. This one is senseless on so many levels. The officer had 2 small children at home who are now fatherless.

13. For the second time in two weeks, a permit holder walking into a grocery store shot himself with a gun tucked into a waistband. What's happening? Why do people need guns in the grocery store? I sure don't find my grocery store to be a dangerous place. I know a lot of people who shop at the store where I shop. It's sometimes a place to meet friends and now there is a Deli and coffee shop where friends can meet. So this store is a friendly place. There is absolutely no need for a gun inside of it. As it turns out, carrying a gun into a grocery store is more dangerous for the permit holder than for any potential threat lurking in Aisle 3. And it could be dangerous for others as well depending on where the bullet goes.

14. Folks in Maine are trying to get used to people with holstered loaded guns walking around in shops. Who knows what will happen? From the article, " But, as Sunday's experience demonstrates, there's a problem with open carry: When that person walks through the door, how can customers tell if the person bearing the weapon is a potential rescuer or killer?" Exactly. That is what I have been saying over and over again. The gun rights extremists want us to get used to them carrying their guns around in public places because they claim they can protect us all. So once everyone starts carrying, everyone starts carrying- including prohibited people. How will we know the difference? Where is common sense?


15. This Georgia man got himself into trouble by having a bunch of guns and ammunition in his car while parked in a college parking lot. Here is a statement from the judge who heard this case, " In an interview today, Thomas said Cornelius' new resident defense may have had merit, but there was no excuse for possessing large-capacity weapons - which are strictly forbidden under state law even with firearms permits." Here is what was found in his car at Mount Holyoke College in Massachusetts-" The search turned up a loaded 12-gauge shotgun with a pistol grip, extended magazine tube and a laser sight; a .308-caliber assault rifle with a bipod stand, flash suppressor and pistol grip; a .45-caliber semiautomatic pistol with two high-capacity magazines; 76 shotgun rounds and 1,494 rounds of rifle ammunition, according to court records." What was he planning with that arsenal?


16. The stupid things done by gun permit holders just keep coming. This latest one, from the Seattle area, is about a man who threatened his daughter's boyfriend with his loaded gun. He found the boy naked in his home. One can infer about what was going on in the home. But does this deserve to be met with a loaded gun? How many parents have encountered a similar situation? Of course, no one likes it. But to get out your gun and threaten the boy and slap your daughter around while holding them both in a room at the wrong end of the gun? Not a good idea. " According to charging documents, Gooden told the boy he “knew the gun laws and could shoot (him) for breaking and entering.” “I have every right now to blow your brains out!” Gooden is alleged to have said."" Really? I don't think so but nice try. Would this be the so called "Shoot First" defense in a shooting allegedly for self defense? Did the boy attack the man? Did the boy break and enter? What kind of person would even think to say something like that? Does carrying a gun make someone bolder than they would be without one?


17. And one more. I thought I was done writing about incidents for this week but they keep coming. A college and several area schools in Santa Monica were shut down today because of reported gun fire. As I said in my last post, it is just a matter of time before we have another school shooting in our country.


18. And, finally, the silly season is upon us again as political rhetoric ramps up. But I have a problem with this kind of political rhetoric: " “This is a very fluid situation right now,” Senator Charles E. Grassley, Republican of Iowa, said as he arrived at the Waterloo event on Sunday evening, the day after the straw poll delivered the first significant organizing test of the campaign. “From here on, you are shooting with real bullets.”" I know, I know, it's just a "figure of speech." But given that President Obama has had more death threats than any other President and the hatred of him is so fierce among some, saying something like Senator Grassley said in this quote is just plain not a good idea. Where is common sense?
Posted by japete at 7:25 PM