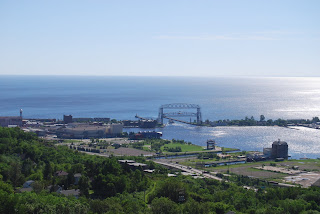 Duluth, Minnesota is a city that is known for water, water everywhere. It is situated at the head of Lake Superior, the largest fresh water lake in the world. In the summer, there is not a better place to live. And there are many opportunities for amateur photographers to try their hand at the art of photography. I am one of those. Minnesota, of course, is the land of 10,000 lakes making cabins, boating, swimming, fishing and other water sports prevalent in the area. Tourists come from all over the country to see the area known as Canal Park where lies the Aerial Bridge, another one of its' kind. And yet another geographic feature of the area are the numerous creeks and rivers that flow through the city of Duluth on their way to Lake Superior from the higher land away from the big lake.

Last night, we had a powerful thunderstorm that dropped 3 inches of rain in my yard, according to the rain gauge in my garden. Some roads were under water. A Facebook friend announced that her sump pump had failed and her basement was flooded. We were lucky this year. That happened at our house last summer when we had a bunch of "gully washers" in Minnesota. This summer is proving to be similar. Climate Change? Maybe. I don't remember these kinds of heavy rains hitting us with so much frequency. 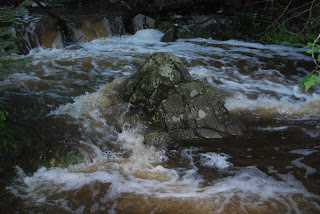 Where is all of this going? I have decided to diverge from my usual posting style to talk about things other than guns and gun violence. This decision was prompted by the last few weeks of uncertainty and ugliness about the national deficit and debt ceiling. Prompted also by the beauty and the destruction of water in my area, I wanted to reflect on both of these. So last night, the House of Representatives voted to pass the Debt Ceiling bill. It has been a tumultuous few weeks, much like the creek near my home that is rushing around rocks, over somewhat precarious rocks making impressive water falls after the storm. The creek also made its' own paths and forged new pathways along the banks, as it spilled out making its' power known. It doesn't care what is in its' way as it flows downhill with a mission. 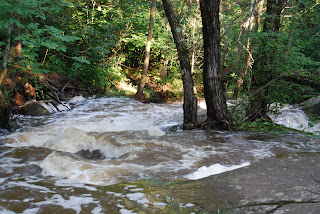 I am an unabashed and proud political liberal. It strikes me that the Tea Party caucus of the House of Representatives is similar to that rushing creek. It has a mission that, in my opinion, is bent on destruction and doesn't seem to care what is in the way. But for just a few moments last night, something wonderful happened in the midst of the tumult. Arizona Representative Gabrielle Giffords came to the chamber to cast her vote on the Debt Ceiling bill, knowing that this was that important that she needed to be there. What a brief moment of clarity and single minded purpose in the House Chambers. Her presence reminds us all of the awful destruction that comes at the hand of a crazed person with a mission- to kill as many people as possible with a gun loaded with high capacity magazines. We've seen this film before and we will see it again. We saw it Norway a few weeks ago.

What struck me was the embodiment of courage represented by Gabrielle Giffords last night. She showed more courage than most of the rest of her colleagues in the House have in the past few poisonous weeks.  It gave me hope that some things could change. It gave me hope that there can be healing. I have been feeling out of sorts with the politics in this country. It's enough to make a grown woman ( and man) cry. Here we have a man-made national emergency that took our country to the brink of economic default. We have had too many days like that of late. January 8th, 2011, was another man-made national disaster. It was tumultuous and powerful and brought people together. Sometimes we, as a country, can come together without malice and destructive motives, and work together for the common good. I am waiting for that day concerning gun violence prevention. I think it's possible. I'm weary of the fighting and the obstructionism and the ugliness that passes as "debate" about what to do about the daily carnage due to bullets.

Water can be calming or it can be scary and life taking. Today, another swollen river in Duluth may have taken the life of a person who was attempting to swim in the raging torrent. More information will be known later but I heard many sirens this afternoon and knew that something bad had happened. Many emergency workers swarmed to the sight. Last week, a young high school student died after he was swinging from a rope swing on a local lake and hit his head on the side of a boat. I knew this boy. He was a student at the elementary school where I worked. He was a popular student, involved in sports and other activities. I remember him as a kindergarten student who cried a lot when his mother left him in his first days of school. Now his parents are crying for their loss.

An anniversary happened yesterday. It was 4 years ago on August 2nd that the 35W(freeway) bridge collapsed into the Mississippi River. The son of good friends of mine was the 12th of 13 bodies to be recovered in the wreckage of the bridge and his car in the river. Who can forget that day? Now we are actually inspecting bridges. Will we do anything about funding infrastructure projects to make sure more bridges don't collapse? Not likely the way the poisonous political atmosphere is. Water again, figures in an anniversary of death. A memorial was dedicated yesterday in memory of the 13 dead and many injured and survivors. One of the photos from the link shows the water wall with a quote: " "Our lives are not only defined by what happens, but by how we act in the face of it, not only by what life brings us, but by what we bring to life. Selfless actions and compassion create enduring community out of tragic events."" What will we bring to the discussion about gun violence prevention that can make a difference? I will continue asking that question.

As the anniversary of my sister's murder comes around again on August 5th, I think again about her senseless death and her vivacious life cut short by bullets. Those anniversaries never go away. They happen every year. They come with much sadness. After a few have passed, they can turn into calls for action or doing something about the cause of the death for those who choose that route. Water was a force in her life as well as she lived in a house on a lake. Tragically, her own child, 14 month old Christie, drowned in that lake. None of us will forget that day. The loss of her only daughter was devastating to my sister. My own daughter, a year younger than Christie, became very special to her. Water and bullets are powerful forces that can do a lot of damage, leave destruction behind and even take lives. We often cannot control those forces. There are man-made disasters that should and could be controlled but often aren't. Senseless gun deaths come under that category.

Is there hope? Is there light at the end of the tunnel? Gabrielle Giffords gave us some hope last night. As she struggles to have some sort of meaningful life, we struggle with finding some common ground on issue after issue after issue. After a day of some reflection about issues in general and the gun violence prevention issue in particular, my walk to the creek near my house gave me some solace. Though it was rushing in a powerful torrent, it can be a calm and peaceful creek meandering towards Lake Superior. Water can be healing as the photo of the water wall from the link above and my photo of peaceful and clear Lake Superior water lapping over the rocks beneath. It can be calming. I am hopeful. Common sense may break out. 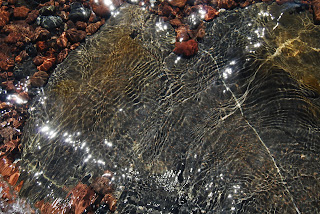 And lastly, to my readers, I will be taking a little time off to be with my children and grandchildren. Family time is precious in the midst of tumult and uncertainty. We will be swimming and boating at our cabin and throwing rocks in Lake Superior. It will be healing but likely not calming.
Posted by japete at 9:34 PM