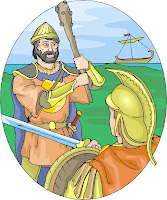 Molon Labe. The phrase had been used at the end of comments by some of the readers of my blog. "..Modern Greek [moˈlon laˈve]), meaning "Come and take them" is a classical expression of defiance reportedly spoken by King Leonidas I in response to the Persian army's demand that the Spartans surrender their weapons at the Battle of Thermopylae. It corresponds roughly to the modern equivalent English phrase "over my dead body", "bring it on" or, most closely, "come and get it". It is an exemplary use of a laconic phrase." What's this all about? It appears to be some sort of battle cry or dare. Some gun rights extremists are  so paranoid about their guns being confiscated that they have resorted to a rallying cry. Amazing, really.


Those in other countries may understand the above described version of what the word means. But, " In America, both the original Greek phrase and its English translation are often heard from pro-gun activists as a defense of the right to keep and bear arms. It began to appear on web sites in the late 1990s and early 2000s.[citation needed] And when the government of New Orleans defied Federal court orders to return weapons that had been seized during Hurricane Katrina[dubious – discuss], the phrase again gained popularity among supporters of the Second Amendment, as the phrase has connotation of a strong belief in the ideals of personal freedom and an the individual right to self-protection.[citation needed] In the Second Amendment or firearms freedom context, the phrase expresses the notion that the person uttering the phrase is a strong believer in these ideals and will not surrender their firearms to anyone, including governmental authority, without strong resistance.[6]" I am wondering why there are dubious sources or uncited information on this entry?


So here we have a group of gun rights extremists daring the government to take their guns away as if it could or would happen. These folks are so paranoid and have been so fooled by the NRA and others in leadership in the gun lobby that they actually believe this will happen. And they are prepared for battle if they perceive this false assumption to be imminent. On my blog, I regularly assure them that there is no interest in me personally, or anyone I know in the gun violence prevention movement coming for their guns. Never mind. They don't believe me and call me rude, offensive and just plain childish things as if they are teen age boys who need to establish their territory and their macho credibility. Calling names is a tactic when they can't do anything else. Even their own leadership, NRA Executive VP Wayne LaPierre, just loves to call names and make things up when he is communicating with his "base." Here is his latest lob at President Obama-  " President Barack Obama and U.S. Attorney General Eric Holder are now using this same mob-style tactic on American gun owners." Come on. I doubt that many in America believe that. Where's the evidence for it? There just isn't any. Talk about hyperbole. Some of my readers accuse me of that. But this one is just beyond belief. What mob style tactic can he be talking about? Ramping up fear is one of the things the NRA does best.


I do worry about some of the far right extremists acting on their fears, however. President Obama said that what he and the Administration fear the most as we are closer to the 10th anniversary of the September 11th attack on America is a lone wolf terrorist with a gun. President Obama is right. The next terror attack could very well be a home grown terrorist with a weapon or two who could leave a lot of tragedy in his or her wake. I have blogged about this several times before. It would be the kind of terror that Norway experienced or that the Washington D.C. area experienced when two snipers terrorized several communities for weeks. I worry that there are right wing extreme militia groups and individuals who want to do harm to the President and to our country. All it would take is one or two crazy or angry people to do a lot of harm. Let's hope that we can honor the victims of the September 11th attacks peacefully. The occasion will be fraught with emotion and reminders of what happened on that awful day. I hope that common sense will prevail. Using the term "molon labe" as a rallying or battle cry is potential encouragement for someone to act on their mistaken and misinformed thoughts and feelings about gun rights.
Posted by japete at 12:36 PM