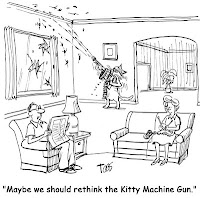 What is this all about anyway? First Jesse Kelly, about whom I blogged a while ago concerning his campaign ad with him and his assault weapon- now the Pima County, Arizona Sheriff candidate with a machine gun shoot. Jesse Kelly tried this when he ran against Representative Gabrielle Giffords in 2010. I guess the machine gun thing doesn't necessarily win you votes. What guns, and most especially assault rifles and machine guns, have to do with running our country and making one a better leader is beyond me. It should be beyond the gun nuts who think it makes a difference as well. Ah, but then, this is Arizona, where things are a bit different. But wait, this is Arizona where Representative Gabrielle Giffords experienced an assassination attempt on her life on Jan. 8, 2011. Pima is the county where lies Tucson, where 6 people were shot to death and 13 were injured in the mass shooting at a shopping mall. This is Tucson where a crazed gunman who shouldn't have had a gun got one anyway and went on a spree in a totally senseless shooting. This is Arizona where there are 18 gun deaths per 100,000 per year- the 5th highest in the country. This is Arizona where, according to this new article in a series about gun rights in Arizona, is the land of the free and six shooters.

Is this the America you want to live in? I want change. I want common sense. I don't want any one's rights taken away in the process. I want the gun guys to stop using the second amendment as an excuse for doing the right thing. I want fewer gun deaths and injuries. I want fewer families to feel the pain of losing a loved one to a bullet. I want fewer people to be sitting in wheel chairs with permanent life time injuries because of a bullet. I want fewer people to be walking around with bullet fragments in their bodies. I want our politicians to be bold and courageous enough to stand with the majority instead of the bullies. I want President Obama to act in spite of the NRA to let America know that he is fed up with the intransigence about making better gun policy to save lives. I want President Obama to talk about our own country's contribution to the carnage in Mexico. I want Representative Gabrielle Giffords to walk and talk again and take her rightful seat in Congress where candidates don't put gun sites on Congressional districts or members any more. I want politicians to stop thinking that holding a machine gun shoot is just not a good way to get elected to public office.
Posted by japete at 2:55 PM