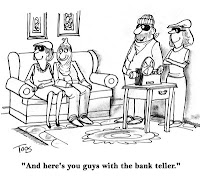 Reruns get old after a while. Take, for example, incidents of people misusing alcohol and guns resulting in injury or death of innocent people. And why are these re-runs so often in Texas? Hmm. I wonder if it has anything to do with Texas gun laws. Oh, you might want to know that I am referring to this latest incident concerning a bar, an argument over changing the T.V. channel in the bar and an AR-15. Now one would think that a couple of guys could argue over which station to watch while having a beer. They might even get into a little shoving or maybe a punch or two. But if you have an AR-15 at the ready ( as surely everyone should) you can take care of the argument quite quickly and definitively. And now, yet another senseless shooting has occurred. One man is dead and another is in jail and will likely stay there for quite some time. Where is common sense?

Here's another "unsolved mystery" with new information for the re-run. Remember when I posted about the tourists who were shot and injured during a reenactment of a wild west shoot-out in the Black Hills of South Dakota? Here is information that changes the outcome more than a little. It turns out that one of the men shooting the guns which were supposed to have blanks in them is an actual felon; felons can't own guns or be around guns. So why did this happen? The Minnesota woman who was shot that day had this to day:" "If they had done a background check, they would have known he was a felon. If I want to go down to the senior center and volunteer in the office, I have to have a background check. So someone who is going to be using a gun, even if it's supposed to have blanks in it, and doesn't have a background check ... it's just boggling."" There is still a mystery about how and why live bullets were in those guns instead of blanks causing injury to 3 people. That may be for another sequel.


She's right. At my church and all churches, I assume, anyone who comes into contact with children must have a criminal background check for which the church pays. This is a no brainer. Bad people do bad things to young children sometimes. In order to prevent that, we make sure those bad people are not hired to work with our children. My son, who worked for a major accounting firm as a CPA in his first job out of college, had to have a criminal background check. I wonder why? Common sense tells us that those who deal with sensitive financial information of private and public firms should not be criminals- at least not when they begin their careers. As we all know, sometimes these folks become criminals. But that's another story and not for this blog. Teachers must have background checks. People who adopt pets at the local animal shelter in my home town have to have background checks, for goodness sake! Doing simple background checks on ALL people who buy guns or handle guns for a living should be a no-brainer and just makes common sense. Sadly, in America, common sense is lacking.
Posted by japete at 9:38 AM