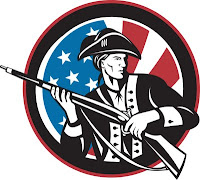 It's hard to know what to say about this video of a recent Glenn Beck show. As usual, his rhetoric is enough to send you running for your guns and maybe even for a bunker as you get ready to use your arsenal against your own government. What is this all about? As we head into the July 4th holiday week-end, patriots all over the country celebrate our country's beginning. Flag waving is in order as are parades with lots of military vehicles, military personnel, fire trucks, police officers, and veterans throwing candy to the kids standing on the sidewalks watching the spectacle. So what does it mean to be a patriot? Watching the Beck video and celebrating the fourth of July got me thinking about what is going on in our country right now.

Listen carefully to what Glenn Beck and others like him are saying about their own country. What they seem to want is an insurrection against their duly elected government and they encourage people to have their guns at the ready just in case. Beck is telling his viewers that even the Supreme Court, which has made two recent decisions supporting the right to bear arms, is not to be trusted. If you trust in what the Supreme Court decided in Heller and McDonald, you should feel good about your Second Amendment rights. So why doesn't the gun lobby trust in the decision? Beck is also telling his viewers that they can't trust police because inevitably they won't be there to stop crime. Gun rights advocates don't trust that law enforcement will ever be there when needed so therefore, the need for their own guns to take care of crime in the home or on the streets. No one can stop all crimes- not even the gun guys. But law enforcement is trained to protect us and I trust them. If you don't trust the police, you can have a gun in your home to protect yourself. That right is guaranteed. Beck tells his viewers in this video that our leaders just don't get it and that is why you need to protect yourself, your family and your neighbors with your guns. To Beck and the gun lobby, the second amendment has now morphed into a right to protect yourself against your own government.

And something new has occurred in our country with the emergence of the Tea Party. At rallies, they dress in Revolutionary War costumes to make sure everyone knows that they are patriotic and adherent to the original writings of the founding fathers as if nothing has changed in 200 plus years since our country's birth. Sometimes they even bring their guns to their rallies. On the Tea Party Patriots site, it is clear that these folks are patriotic. There are American flags on the site and before you get to the home page, there is a visual of the Statue of Liberty with a flag in the background. The site is even called "Teapartypatriots". I guess they envision themselves as "uber" patriots.

So basically, Beck and his followers don't trust the very government that was envisioned by our founding fathers when they wrote the Constitution. This hypocrisy is beyond reason. These are the very same people who love to say they have read the Constitution at least three times and carry it around with them in their shirt pockets, just in case. These are the same folks who love to quote the founding fathers thinking that that makes them more patriotic than those awful progressives like New York City Mayor Bloomberg who founded Mayors Against Illegal Guns. The video that Beck plays on his show was produced by Mayors Against Illegal Guns to call attention to the fact that Al Qaeda leaders tell their followers how easy it is for them to get guns in America from gun dealers and gun shows. Beck doesn't think this is a problem because he says that the terrorists will just get them somewhere else so why bother tightening up the current law. That is the same line the gun lobby uses about criminals. They get their guns on the streets or they steal them. The problem with this line of argument is that guns start out in the legal market. They are stolen from the homes of gun owners or from gun dealers who are careless or actually, knowingly sell guns to straw purchasers. We do have a number of corrupt gun dealers who contribute to the illegal gun market as well. Or they get them from someone who buys guns at gun shows and sells them on the illegal market. As we all know, in many states, there are no background checks required for private sellers. That makes it easy for just anyone to walk out of a gun show with many guns, as has been shown in various videos that you can see on my blog site.

To the gun lobby, gun laws don't work so why have them anyway? Or just enforce the laws already on the books. Or just make sure the punishment for using a gun in a crime is severe enough to dissuade criminals from robbing someone at gunpoint or shooting someone. The problem with this line of reasoning is that criminals and terrorists don't really think about the punishment before they shoot or attack someone in the heat of the moment. Going to prison for life or getting the death penalty ( in some states) has not stopped them from their criminal behavior so far. This is also the line of reasoning that parents use when they tell their children not to speed while driving or not to drink while underage or not to do drugs. They will be punished. Do teens always listen to their parents? Do they think about these parental admonishments before they go ahead and engage in risky behavior anyway? It is understood by most everyone that America's gun laws make it easy for the wrong people to get guns. Using the logic of Glenn Beck and the gun lobby, we shouldn't even try to stop them because if we do, it means that, of course, your own second amendment rights will be violated.

So back to my point about patriotism and guns. If you listen closely to Beck's words, he throws in Communists and Socialists and evokes Hitler, Mao and Stalin. What does he mean by this? It's an exercise in futility to argue about guns and Hitler/Stalin/Mao. There is no proof one way or the other that the lack of guns or confiscation of guns had anything to do with why these awful leaders came to power. Surely we don't want our country to suffer the same fate. But the chances of that happening are slim. Our Constitution was meant to protect against this type of take-over by a dictator. When Beck asks someone in the audience in the video what the second amendment means he has to keep prodding the man until he finally says the right thing- to protect oneself and one's family against the government. What happened to the first part of the second amendment that says, "A well regulated militia, being necessary to the security of a free state..."? What is a well regulated militia if not the armed services and the national guard? The second amendment is not meant to cover armed citizens in acts of treason against their own government.


Given Beck's interpretation, the militia must be made up of every day Americans who have charged themselves with the responsibility to fight against the government rather than to be with the government when needed. Beck and others who agree with him have a vision of Army tanks on our streets coming to take away our guns. He even mentions in the video that he is ready when the tanks come. This world view is foreign to me. Guns and patriotism are not one and the same. How did we get to the place where a T.V. and talk radio host can tell people to be ready to fight against their own country?

So who is a true patriot? In the Wikipedia entry linked above for the word patriotism, you can see that, as often is the case, the entry itself is subject to interpretation. "The neutrality of this article is disputed". You can check out the differing opinions about the word here. But what is the commonly held definition of "patriotism"?  Here, from the Merriam Webster dictionary is the definition: " love for or devotion to one's country". How can this be measured and who decides whether someone is patriotic or not? Is Glenn Beck, who wants people to increase their arsenals of personal guns to fight against their own country more of a patriot than Mayor Bloomberg who wants to keep people on the terror watch list from getting guns that could be used to attack innocent Americans? If we are to believe Beck, patriotic Americans should use their guns to display their patriotism. This ramping up of fear and paranoia against President Obama, his policies and the government should frighten us. Differences of opinion and philosophy should not be solved with guns. That is what elections are about. Americans show their patriotism in many ways. One does not have to dress in costume, or have a lot of guns, or wave a flag from their car or their porch or wear a flag lapel pin. Using patriotism to ramp up fear of the government just does not make common sense. Happy Fourth of July to all patriots out there.