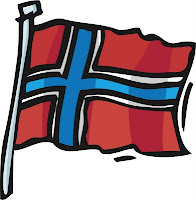 I was planning a different post for tonight but I am so upset about the attacks in and near Oslo, Norway that I can't stop thinking about it. I just recently read this article saying that over 80 people had been killed in today's attacks. Because both my husband and I have relatives in Norway, this is even more concerning. We have visited that most beautiful country and have met many relatives there. My maternal grandfather emigrated to America when he was 16. My husband's mother was born in America but many of her siblings were born in Norway before emigrating to America. We have close family ties to both Norway and Sweden but know our Norwegian relatives better. Some of them have come for visits to America and stayed with us. We actually named our son after one of my husband's relatives.

Norway is such a peaceful country. They suffered during World War II when the Nazis occupied the country. There are still strong feelings there about that war. When we visited Norway, my husband's relatives told us how their father had been taken to an internment camp in Germany for political reasons. We saw the small hide-away huts in the mountains when we stayed at a "hytte" or a cabin in the mountains near Bergen owned by a relative. There is where many hid from the Nazis during the occupation. It was an educational and emotional visit. My own relatives live in a town outside of Oslo where we also visited on May 17th, "Sytennde Mai", or Norwegian Constitution Day. It was such a wonderful sight to see the women and children in their national costumes or bunad. My mother was given the bunad of her Norwegian relative and wore it often to local events. It is a prized possession.

You can see here, that Norway has very strict gun regulations. One must show a need for a gun and prove that the guns will be properly stored. Ammunition is limited as are certain kinds of guns. Gun policy in Norway is not controversial and makes a lot of common sense. So for someone to obtain what is reportedly an assault weapon to shoot innocent youth camped on an island near Oslo is unusual, to say the least. There are very few shootings in Norway. The shooter must have had several rounds of high capacity ammunition magazines to shoot so many all in one place. Surely campers on an island would not have expected something this horrendous could be possible.

I am sure that as more information comes forth about the horrendous events in Norway, we will find out more about the shooter and where and how he obtained his gun. The fact that he was arrested must be a relief to the entire country. Meanwhile, we are awaiting word from our relatives that their families are safe.
Posted by japete at 10:48 PM