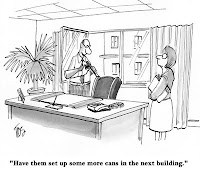 Here is a very sad story about a Minnesota man who shot his brother with a shotgun he thought was unloaded. I actually feel sorry for this man. He was drinking and got mad at his brother. But why was his first response to get his shotgun out of a bedroom? Why is that often the response? When a gun is available, it just may get used. It wasn't locked up obviously as guns, especially of the loaded variety, should be. And when you are drinking, you may not remember that that gun was, in actuality, loaded. But why leave a loaded shotgun around in the first place? Now this man has served time and will serve more and is suffering for what he did. Senseless.

What about attempting to shoot your dog and killing your husband instead? This story shows that shooters don't always hit their mark. First of all, in my opinion, Pit Bulls are dogs that should not be pets.They are aggressive dogs and the subject of stories about  attacks against people. When it gets to the point of having to shoot your own Pit Bull to keep neighborhood children safe, it seems like you have a big problem. More problematic in this case was that this woman shot her husband to death instead of her dog. Who else might she have shot when her aim was wrong? Even police can't always shoot their own intended targets. Here is an article about the New York Police Department's gun discharges over 11 years from 1996-2006 as an attempt to examine when and how the police use their guns on the job. I found this part pretty interesting: " Officers hit their targets roughly 34 percent of the time." And this, " So far this year the hit ratio in Los Angeles is 31 percent, with 74 of 237 bullets fired by officers hitting the target."


Given that, which I am guessing is probably true for most police departments, I wonder how the gun rights activists think they can absolutely defend themselves with their guns? I get the impression that these folks are confident that if they need to get out their gun to protect themselves in public or at home, they will be 100% accurate. This certainty is why they believe that we will all be safer with more loaded guns in public. It is their modus operandi to get more people to think they need to carry loaded guns around. It is their modus operandi with elected leaders when they say we will all be safer if more people have guns. There is no evidence for this but we are dealing with an issue steeped in emotion and false rhetoric and a whole lot of talk about the 2nd amendment and unfettered rights. If you say something often enough, even if not true, it is sometimes  believed. But I digress. Back to the topic of senseless shootings and/or gun incidents...

Oops. What goes on in some one's mind who is "play wrestling" with a friend and then decides to just shoot him in the stomach instead? This was an intentional shooting by a Florida gun permit holder. Why? Senseless. I wonder if anyone at this gathering had a good time? And further, his sentence?- house arrest and 5 years of probation along with financial restitution. I wonder if his gun and permit rights were taken away? Hmmm. Where is common sense?

I don't know about you, but I expect my elected leaders to practice what they preach. This Ohio legislator was one of the supporters of Ohio's bill to allow guns in bars where alcohol is served. Senator Jordan is also a gun permit holder, as is his wife. Isn't it great that he thinks it's O.K. to have guns in public where alcohol is served and not worry about whether the combination of the two will be dangerous?  But then, when imbibing too much himself, he engaged in physical violence against his wife, and, according to transcripts of the 911 call, Jordan took one of his many guns from it's usual spot. And the state Senator was angry enough to cause his wife to call for help from law enforcement. This is what I call hypocrisy. He is the poster child for why drinking and being around guns is just plain dangerous. Here is one of the comments from the linked article, ".. why was she calling 911?  i mean, she has a concealed carry permit, and i've been told by the gun nuts that as long as you have a gun, you're safe.  wasn't she safe, then? " That is a good question. Will he think that his own behavior is excusable? Will he think that his own vote doesn't matter? Well it does. If he himself can't control his anger when he drinks too much and has a gun available, what makes him think that anyone else can? Everyone was lucky that he didn't decide to fire that gun at his wife. But I'm just saying....
Posted by japete at 9:14 PM