Right. Little pink guns are so cute. I had one in my hand at a recent trip to a gun show. It was cute all right. It can also do serious damage. But this Arizona legislator should not have cavalierly pointed it at a reporter. That part is not cute at all. Aiming a loaded gun at someone as a "joke" or to make a point is totally irresponsible. And, one might want to know, if the Arizona legislature does not allow citizens to carry inside of its' own chambers, why do they themselves need to pack heat inside? What could they be afraid of? The only conclusion one can come to is that they are afraid of each other packing heat. This disingenuous notion that the halls of the Capitol are so unsafe that legislators need to pack heat has been foisted on average citizens with hardly the discussion it deserves.

Regardless of whether guns are cute or, according to some, are necessary for their everyday safety, they are designed as deadly weapons. The NRA and the gun lobby try to take the danger out of guns by referring to them as cute or necessary tools. They are wrong. I am not the only one to say this, as I do continuously on this blog. This editorial takes lawmakers to task for not only packing heat themselves but for ignoring the carnage happening under their leadership for which they claim no responsibility. But the idea that elected officials feel the need to carry guns in their state houses is worth examining. That I will leave for a sequel to this post. I would first like to explore those little cute pink guns designed to appeal to women.

Guns for women, I guess, should be feminine looking to get women to buy them. Here is a website recommending guns for women. One comment made mention of being careful about storing certain guns and holsters in a handbag because all of the stuff in a purse could "mess with the trigger." Oh dear. That is something to consider. Purses seem to be the place where women would most likely carry their guns. But all that other stuff in a purse? When reaching for your wallet, be sure not to reach for the gun instead. First of all, it could freak people out in the grocery store. Secondly, what if it discharges? Oh, yes, that never happens of course. Unless it does. Below are photos of some of those cute pink guns: 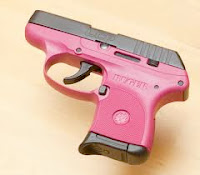 Oh, and this is cool. A woman can hide a gun in her bra. I would think that would come in handy when confronted with a real live situation of needing that gun. I wonder how easy it would be to reach for that gun given what a woman is wearing on a particular day? In my part of the country, layers are often needed and coats and jackets. I would think fumbling around trying to get the gun out from under a bra would take a good bit of time that should be used to defend yourself. What if you are wearing a dress that day? You would necessarily have to bare all to get that gun. But I'm just saying. To get women to believe that this is a viable option is a false sense of security. To get to the gun would not make it easily accessible for self defense. The same would be true of a gun in a purse. So what if you are confronted by a criminal on the street? Do you hold on to that purse? Does he/she ask you to drop it? How do you sneak that gun out of your purse without calling attention to what you are doing thereby lowering your chances of surprise? But I'm just saying.

This Kentucky women, a nurse, writes about how she first came to like shooting and carrying a gun. She says: "I liked the adrenaline rush that shooting gave me as well as the competitive aspect of trying to shoot that little ‘X’ in the middle of the target." Actually, I can see myself liking the idea of shooting at that little "x" in the middle of the target. I am sort of competitive and like the idea of hitting something at a target. I have a friend who has gone to the local gun range with a group of women for a birthday party and liked it. She does not and will not carry a gun but she had a good time shooting at a target. The blogger, above, also says this: " I want to help other women understand that guns are not what the media makes them out to be; that in the hands of responsible citizens, they are a valid means of self-defense." What does the media make guns out to be? Of course, the folks on the side of gun rights think that the media is on the side of gun control and against them. Perhaps the media is just telling the truth. Or perhaps the media has done nothing to make guns out to be whatever this woman thinks they have.


Carrying concealed guns has not proven to be more effective for self defense than anything else. In fact, there are fewer instances of gun carriers using their guns in public for self defense than in using them in accidental discharges and sometimes intentional shootings. Data is difficult to obtain and assess regarding these two phenomena. I believe we need better data going both ways but no matter the data, my guess is that more people read about and hear about the guns used for homicides or accidental discharges in public than in self defense. That does not mean that those incidents do not occur. In previous posts, commenters have provided me with their own examples of legitimate gun self defense use in public places. Many of them have sampled the Kool Aid of John Lott and do believe that more guns make us safer. But we do have studies and data showing that a gun in the home is more likely to be used against you or a loved one than against a criminal or someone else for self defense.


Common sense tells most women that carrying a gun in their purse is likely to be more of an inconvenience than a life saving measure. What about children? Do they ever go through their mother's purses? What about putting your purse down somewhere at work or at play? I often don't take a purse for certain activities. Sometimes women store their purses somewhere safe when they are at work. Sometimes the purses are left in the car when just stopping somewhere for a short time. Sometimes purses are left in a coat room or on a bed, along with a coat when going to a social event at a private home. When visiting with friends or going to a social event, I don't usually have my purse at the ready. I wouldn't even consider the idea that I would need a gun at a friend's home or at a fund raiser or social event.  In public I often take a much smaller purse to social events, concerts, etc. because carrying a large purse is inconvenient. Sometimes women store their purses in the glove compartment of their cars. Not a good idea. I wonder if the women who advocate carrying a gun all the time actually do? They are inconvenient. They can be found by others. They are heavy. My guess is that few women find carrying a gun to be a viable option for their safety. The chances of needing one in public are slim. Why take the chance of shooting someone else by accident or having someone else find your gun?

Are women actually safer when carrying a gun or using a gun for self defense? Here is some evidence that women are actually more likely to be killed by a gun than to save themselves with one. From this article, " It is often intimate acquaintances and family members who endanger a woman's life.11 Yet women who own a handgun for self-defense usually do so to protect themselves from strangers. Many women who use handguns to kill in self-defense use the weapon against someone they know, or someone with whom they have, or have had, a romantic relationship." This data is not recent but still remains true as we continue to see that over half of women who die in homicides, die because of a bullet and usually that bullet comes from the gun of someone they know. I have written before about domestic violence and guns and know first hand how that works because of the shooting death of my own sister and of so many other women. In domestic violence cases, over half of the women killed were killed by a handgun. Other studies verify this as well. From this article by the Violence Policy Center, " An analysis of female domestic homicides (a woman murdered by a spouse, intimate acquaintance, or close relative) showed that prior domestic violence in the household made a woman 14.6 times more likely, and having one or more guns in the home made a woman 7.2 times more likely, to be the victim of such a homicide."


I have found some interesting websites regarding women and guns. Here is one showing that sometimes women can't handle those larger rifles. You can tell by the laughter in the video that the guy taking the video thinks this is pretty funny and probably cute. Also there are websites showing scantily clad women and semi-porn photos of women with guns calling them sexy. Really? To whom does this appeal? Are women to believe they can be more sexy if they have a gun? Or do men think that women with guns are more sexy? And there are numerous sites supporting women owning and shooting guns, too numerous to list here. You can check these out for yourselves. And lastly there is this organization, Women Against Gun Violence. This site is interested in working to prevent gun deaths and injuries. Women and children remain vulnerable to gun deaths every day in our country. There are a lot of statistics and referrals to other websites about guns used in homicides and suicides of and by women. The focus here is for women to get involved in this volatile issue.

And last, but not least, there is the occasional accidental discharge of a gun showing the danger of carrying a gun around in your purse. If you think this nurse, who dropped her purse while at work at an Oregon hospital should have gotten her permit to carry back, you are a gun rights activist. She gave a lot of excuses for why the gun was even in her purse at a hospital setting in the first place and why the gun discharged. But come on, everybody, this would have been an entirely different story if that bullet had hit another human being. It just does not make common sense. And further, there are many other ways to keep yourself safe as this website recommends. So think again, women, about buying that cute little pink gun for self defense and whether or not it will actually make you safer.
Posted by japete at 9:28 AM