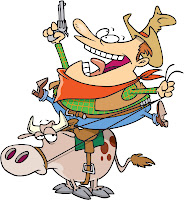 I suggest that you check out if there are guns allowed in popular venues where you and your family will spend some of your summer vacation time. These poor people who innocently visited a popular Black Hills reenactment of a "Wild West" scene were sent to the hospital with gunshot wounds instead of spending the rest of the trip happily with their families enjoying their vacation. What I find the most interesting about this article is that authorities and those who were hit with the bullets didn't know at first whether the bullets had come from the guns of the actors or someone else at the scene. In America some people feel a need to carry guns everywhere they go and, as I have written many times on this blog, innocent people have been shot in public places either by accident or intentionally. All those guns supposedly needed for "self defense" and instead, what we have is careless use of them in public places and the shooting of innocent people. That is not to say that this is the case for this particular incident because, as it turns out, the "actors" themselves shot live bullets instead of blanks while re-enacting a shoot-out. The irony here is that that is exactly what happened during the days of the "Wild West". Real people got shot and were injured or died of the gunshot wounds.

This re-enactment group has some explaining to do and they are clearly going to pay for the damages one way or the other. The innocent victims of this shooting incident have already paid by having been shot. And luckily for all, the injuries were not life threatening. I do really like this, though, from the article: " “What it boils down to is was it accidental or was it intentional. It would be premature to speculate on that at this point,” Thom said. “I can say there was not a specific target in the crowd, if you will.”" What? Could the actors have used live bullets on purpose? And if so, for what reason? Even if the shootings were accidental, the total irresponsibility on the part of the actors and the hosts of the event is staggering. We are talking about real bullets here and real live people. Guns are dangerous. Bullets do not always hit intended targets and sometimes go astray. Incidents like this happen more frequently than they should. Common sense tells us that the care with which guns in public places should be used is of utmost importance for public safety. Senseless "accidents" like this just should not happen, period.


And while I am talking about senseless accidents, I will throw in this unfortunate incident as well to make my point about how often gun use goes awry. The problem with guns on the job or in public is that when something goes wrong, people get hurt. One would think that a law enforcement officer would know better but this is not the first time I have written about guns going off unintentionally while in the hands of a law abiding "responsible" person- even a law enforcement officer. Guns don't always perform as expected. Or maybe it's the person using the gun? I really like this from the Mayor of Reno, Texas-" Cox said he doesn’t feel safe in a building where bullets could be flying." If that isn't the understatement of the week, I don't know what is. Guns are safe, until suddenly they are not. That's what makes guns different from other "tools"or equipment in public places. Guns are designed as weapons to injure or kill an animal or a human. Sure, the common wisdom, if that is what it can be called, coming from the gun lobby is that guns will make us safer. The trouble is, that hasn't happened so far. Otherwise we wouldn't have the most gun deaths per 100,000 of any other civilized country. I read a lot of articles about gun incidents that come across my "desk". Occasionally I read one about a legitimate use of a gun for self defense. But way more often, I read about incidents such as the ones linked in this post. That is not the story told by the gun lobby, but I don't make these things up.
Posted by japete at 9:15 AM