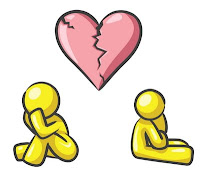 Divorces are messy. Sometimes they lead to one party getting shot to death. These type of shootings happen almost every day in America. The shooting in Yuma, Arizona that left 6 people dead came about as the result of a man angry with his ex-wife and her friends and lawyer years after their divorce. The story is a bit confusing but it sounds as if this couple had a lot of trouble with both filing orders for protection against the other. There was no indication that the trouble would end in the deaths of 6 people. The shooter must have thought this out carefully as he went from one person to the next in his rampage. Most domestic homicides don't result in a spree shooting as this one did but many domestic violence shootings are the outcome of contentious divorces. That is why my sister is dead. That is why way too many women are dead. Often the shooter kills himself as well.

The South Carolina Attorney General's Violence Against Women Department collects statistics about domestic violence leading to homicide and homicide/suicide. From the study, " Men who are driven to murder-suicide are obsessed and controlling, leading them to take drastic measures when women decide to leave, experts in domestic violence say." And this seems to fit with other known information about domestic homicides: " The most common characteristics of murder-suicide in families are a prior history of domestic violence, access to guns, increased, specific threats and a prior history of poor mental health or substance abuse, according to the National Institute of Justice, which researches crime for the U.S. Department of Justice." Not surprisingly, the state of South Carolina found that guns are a definite factor. " In 591 murder-suicides studied by the U.S. Justice Department, 92 percent were committed with guns. And states with less restrictive gun control laws had nearly eight times the rate of murder-suicide than other states."
Keeping to the subject of messy divorces and shooting deaths and injuries, this off duty Roanoke, Virginia police officer took matters into his own hands and shot his ex-wife over some apparent simmering issues from his 2005 divorce and custody of their children. Police officers are subject to marital difficulties just like anyone else and not immune from dealing with their own problems in violent ways. The officer apparently followed his ex-wife into a parking lot and shot her unexpectedly and in cold blood and then fled. She didn't have a chance to get away or try to defend herself. As it happens, this is often the scenario in domestic shootings.


Common sense tells us that guns are too easy to use during arguments and/or cases of domestic disputes and they are more lethal than other methods. Divorce is a volatile time for couples and families. We all know people who have divorced their husband/wife where the result was not violent, but certainly unsettling and difficult. A range of emotions and feelings accompany the break-up of a marriage. Many factors lead to the anger and/or depression that cause men ( the perpetrators are mostly men) to take the life of a spouse, girlfriend or partner and sometimes himself. Families and couples going through these difficult times should be aware of firearms in the home and making sure they are locked or temporarily removed from the home during a volatile break-up. Women need to be more aware of the possibility of the use of a firearm against them in a difficult divorce. The most common response when a woman hasn't been directly threatened with a gun is that it just couldn't happen to her. Surely her spouse or partner wouldn't do anything that violent until, of course, he does. In some cases the shooting comes out of nowhere in a break-up that hasn't necessarily involved violent behavior.


Each individual in a relationship should be aware of the laws in their own state regarding restraining orders, orders for protection and gun rights in the case of a restraining order. In my volunteer work at the local Family Justice Center for abused women, I learned that awareness has increased regarding the potential for violence with a firearm and judges are looking more seriously at temporarily removing guns from abusers. This is not an easy issue. Sometimes the abuser gets more angry when his guns are removed. My local law enforcement officials have told me that they are running out of storage space for these guns because they have so many crime guns in their storage rooms. These are just a few of the issues. We all know that non-violence is the solution but human nature doesn't always work in predictable ways. Working towards common sense solutions however can save lives. I don't have all the answers. But I do know how a gun in the hands of a depressed and angry man who was upset over divorce proceedings that dragged on for years ended the life of my sister. Divorce cases that end in a shooting are tragic, senseless, preventable and avoidable.
Posted by japete at 8:34 AM