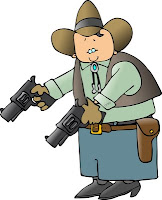 Does anyone else see the total irony in states allowing people to carry concealed weapons without a permit? Here is an article from the Milwaukee Journal Sentinel about several bills being considered in the Wisconsin legislature. So when people can carry their loaded guns around in public and just about every place in public at that, then one can presume that anyone can carry a loaded gun around in public places. According to the gun lobby talking heads, there is no problem with this idea. After all, those law abiding citizens who own guns never cause problems so why not let them carry in public? The problem is, they are wrong. Law abiding citizens all over the country have accidentally discharged their guns and shot and injured or killed either themselves or others. Check out the Ohh Shoot blog if you don't believe me. One of the blog entries is this one about a Wisconsin legal gun owner shooting himself in the wee hours of the morning while drinking. Really? And the Wisconsin gun lobby thinks people like this should be allowed to carry their guns around in public places? But those legal gun owners are always safe with their guns. Don't worry folks, no problems. Just believe us and everything will work out.

Also check out Violence Policy Center for the number of legal permit holders who have committed intentional murder. If this doesn't make you think twice, then you are a rabid proponent of "Constitutional carry". I love how the gun rights folks cloak everything in the Constitution as if that, alone, should convince us that their ideas are valid. And since the gun rights lobby doesn't see the numbers in the report above to be a problem, apparently they believe that a certain amount of collateral damage is necessary in order for them to carry their guns around in public places. This is a crazy way to view gun rights and public safety and needs to be challenged with the truth. These numbers don't lie. They are not manufactured to prove a point. They are the evidence of dead bodies at the hands of legal permit holders. Do we value life in this country? If so, elected leaders will not pass these extreme gun laws.

How are law enforcement or the general public to know if someone carrying is legal or not? They won't. The gun guys will get on this post and tell me that it is illegal for a felon, domestic abuser or dangerously mentally ill person to own a gun so those people will obviously not be carrying in public. Wrong. They, of course, already do and have ready places to get their guns easily. The illegal gun market sells guns to all of those prohibited folks. Where do those guns come from? They start out as legal purchases. They are stolen from private homes of gun owners. They are sold in straw purchases by bad apple gun dealers. They are sold by private sellers at gun shows and other venues where anyone can buy a gun without a background check in states that have not closed the private seller loophole.

So that being the case, what is to stop an illegal gun owner from carrying a gun and acting as if they are just another legal gun owner carrying around in public places? Now law enforcement will and does have no reason to believe that the person they may confront in a traffic stop or on the street is legal. Will the carrier shout out " Don't shoot, I'm law abiding?" Will the law abiding gun owner carrying at the Mall of America or at McDonald's shout out, "Don't worry folks, I'm law abiding?", when said person perceives something amiss and decides to take matters into his or her own hands? Or could that very same person be a felon, domestic abuser, terrorist ( yes folks, terrorists can legally buy guns in this country), repeat drug abuser, gang member, or even, God forbid, an adjudicated mentally ill person? Does anyone remember January 8th, 2010 in Tucson, Arizona? Does anyone remember that in Arizona anyone can carry a gun in public without a permit? Does anyone remember that Jared Loughner had a gun with several 30 round ammunition magazines in public? Did those around him just think that he was another law abiding gun owner when he pulled his gun out? Does anyone remember that the one guy ( Joe Zamudio)  with a legal gun he was carrying started to pull his gun out to take care of things when he realized almost too late that the person holding that gun at the scene was one of the people who had tackled Loughner to the ground and had taken his gun away? Does anyone remember what that permit holder said afterward? He thought the guy holding the gun was the shooter. He almost shot an innocent person. Does anyone think the police would have thought twice before shooting at the innocent person with the gun at the chaotic scene? Who's legal? Who's not? Will law enforcement be able to discern that quickly enough to make that all important judgment? Will people with no training who carry guns in public be able to make that all important and split second decision that they are not trained to make?

You get the picture. Unfortunately, elected leaders all over the country are not thinking through their decisions. They are acting totally and impulsively to satisfy the demands of the ever present and ever noisy NRA and its' minions who actually believe that anyone should be carrying guns in public and the rest of us should just think this is normal and perfectly O.K. Well I, for one, and the majority of Americans, disagree and have said so many times. Our voices are either not loud enough or drowned out by the powerful and well funded NRA whose members are in the minority. Only about 1/3 of households even have guns in them any more. Gun owners are not the majority of us folks. Non gun owners are the majority. So why, you must ask, do law makers listen to 33% of the public when making decisions that involve deadly weapons designed to kill people? That is the question you need to be asking your law makers. Get loud. Make some noise. Demand answers and demand accountability from people who are making decisions in a vacuum or for purely political reasons. They are not about common sense. They are about giving to those who already have and getting from those who give lots of money and lots of influence in elections. Is this a good way to run our country? Is this the way laws should be made? Is this protecting public safety? Is this reducing gun deaths and injuries? I think not.  If you agree with me, get on board and do something about it.
Posted by japete at 11:40 AM