Bullets with your Brats? 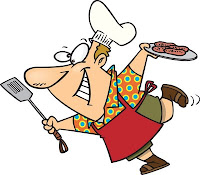 Be careful out there this Memorial Day week-end everyone. Bullets could fly your way at outdoor barbecues or indoor restaurants. Who would have thought that folks waving guns would show up at a neighborhood barbecue after the recent tornado in North Minneapolis?  As we have discussed before, guns and alcohol clearly are not a good mix. But food and guns also appear to be a problem as well. In a busy restaurant in Orlando, Florida, a permit holder carrying his gun in his pants had a problem. His gun fell out of his pants and discharged, injuring 3 people. Oh dear. And it looks like going out for a Donut can also be dangerous. You might just encounter a state legislator in the parking lot of Dunkin' Donuts pointing his loaded gun at you.

You may remember the woman who was shot in the rear end by a gun discharge when a gun fell out of another patron's coat pocket in a Texas restaurant. Now she is speaking out about her injuries and what she has gone through since she was shot while "enjoying" dinner out with her husband. It would be interesting to know the medical costs for treating her injuries. She will likely suffer life long problems because of the injuries to her intestines and colon. The man who shot her? Just another law abiding gun owner.

I'm pretty sure this story is not the first one I have read about a gun going off in the bathroom of a restaurant or bar. Only this time, a worker at a bar was using the bathroom when he was unexpectedly shot in the thigh when his co-worker's gun discharged. " “There has been a lot of odd activity during closing, and at the risk of anything happening at the restaurant, we had a gun here,” Sepulveda said. “But unfortunately, something did happen anyway.”" That about says it all.

And back to Minnesota but unrelated to gun discharges around food, here is bizarre case of a seemingly mentally ill gun owner claiming to be protecting children when he shot off his gun in a church parking lot. What was this man doing with a gun or guns in the first place? He was clearly having mental health problems. He was lucky those bullets didn't end up injuring/killing a person or even the children he was claiming to be protecting.

So what do these stories have in common? First, guns are inherently dangerous because they are designed to kill or injure. Second, there are some people who should not have guns and we can do something about it but we aren't. Third, even law abiding gun owners and permit to carry holders make mistakes in public places with their guns. Fourth, sometimes people are killed or injured when these mistakes happen. Fifth, those with severe mental illness serious enough to have them committed should not have guns. Sixth, guns are not necessary in every public place in our communities. And last, where is common sense?
Posted by japete at 10:17 PM