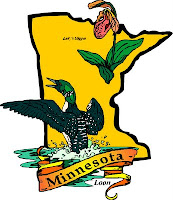 "No man's life, liberty or property is safe while the legislature is in session." Mark Twain knew what he was talking about when he wrote that sentence. 'Tis the season for state legislatures to consider all of their social issue bills. It is happening all over the country now that the conservatives are in power in more states. They have been lying in wait to pass their idealogical bills concerning voting rights, guns, abortion and gay marriage. Minnesota is joining a lot of other states to add bad gun bills to the agenda. The loons have come back to the open lakes of Minnesota and along with them come the looney ideas in the legislature.


This week in Minnesota, a bill will be considered to gut the state's currrent gun laws and add new ones that we don't want or need. Why can't we enforce the laws already on the books? That is the mantra of the NRA after all. But when they want their own laws, apparently things are different-hypocrisy as far as the eye can see. Who is clamoring for a law that will allow people to shoot someone first and ask questions later under the pretext of being frightened or "feeling" threatened? The NRA, and it's lackeys in the legislature of course. Never mind that similar proposals to the ones that will be heard this week have already been opposed by the Minnesota Police and Peace Officers Association, the Minnesota Chiefs of Police Association, the Hennepin County Parole Officers, and the Minnesota County Attorneys Association, among others. These people understand the problems with a bill that will allow someone to murder another human being on the pretext that they feel threatened and then get away with it. No one in Minnesota has been prosecuted for justifiable homicide. This is simply a made up problem looking for a dangerous solution. It has resulted in people getting away with murder in other states where the Shoot First bills have been enacted. No arrest, no prosecution, no jury trial and no time served. That's a pretty sweet deal for the shooter- not so much for the victim and his or her family. Why would we want to continue this charade of NRA sponsored bills that will lead to more rather than fewer gun deaths and injuries? Ask your legislators if they really think this is a good idea. You can find out more about the proposed bill here.


I have discussed the idea of yearly background checks for people who want to purchase handguns and assault guns in Minnesota many times with my local Police Chief and County Sheriff. They think that requiring yearly background checks for permits to acquire these guns is the best way to stop people who shouldn't have guns from getting them. Changing the requirement of background checks for permits to acquire to every 5 years  (as proposed in Minnesota H.F. 1467) will allow people who are potentially dangerous to literally slip through the cracks. People's situations change- they may have become a domestic abuser, a drug abuser, someone with multiple DWIs, or even a felon in that 5 years. Why would we then want those folks to be able to buy guns legally? Of course, this makes no sense but then, the gun lobby doesn't make sense. They continue to fool us by saying they care about criminals getting guns and then encourage laws that would allow criminals to get guns. This is backwards and cynical thinking at its' worst. And why doesn't the NRA care what law enforcement thinks? Serious people need to be asking that question. Legislators must be held accountable for their irresponsible behavior if they allow themselves to be led by the gun lobby's spacious arguments.

Speaking of spacious gun lobby arguments, the Ohio legislature wants to join Minnesota in allowing guns in bars and restaurants. This article pretty much sums up the ridiculous notion that people should have guns where alcohol is served. I love this statement from the article:"Senators also prohibited permit holders who bring weapons into the bars and restaurants from drinking alcohol (wink, wink). After all, bars in Ohio are loaded with customers who sit for hours on end tossing down glasses of Diet Coke." This is also the same illogical argument made by the gun guys on my blog and it comes, of course, directly from the talking points put out by the gun lobby. They want us to believe that since it is illegal to drink and carry a gun, no one will do it so we should all just trust them. You have to be over the legal limit in Minnesota in order to violate the state's permit to carry law. Oh, but wait, once the gun is shot by a person over the legal limit of alcohol consumption, it's too late, right?


Arizona and Idaho's legislatures considered bills to allow guns on campus. These bills failed because of the intense opposition to them by people with common sense. Texas is still in the midst of the fight about guns on campus. Who knows if the gun lobby will win there but the opposition to this bad bill has been well organized and has awakened a few legislators to the error of their thinking. In California, an Open Carry bill is on the table. Will the legislators there allow people to walk around in pubic with their unloaded guns openly carried? It is, for the gun guys, a protest because they can't carry loaded guns at all in California. Of course, in Minnesota, we allow openly carried loaded guns. What the gun lobby wants is for the carrying of loaded guns everywhere by anyone is just a normal thing, like carrying a purse or wearing a belt. The difference is, guns are lethal weapons designed to kill people. They should not be normal in public. Guns should be kept far away from public spaces.


More than 2000 years of Judeo Christian tradition in our country, which is founded on such thinking, values human life. If that is the case, why would we pass laws that so foolishly and cavalierly consider the possibility of innocent people becoming victims of senseless shootings? We already have enough victims and more than any other civilized country not at war. We don't need more. Ask your legislators what they are thinking. Or maybe- what they are not thinking. Common sense needs to prevail.
Posted by japete at 9:42 PM