The inevitable comparison with the U.S. after shootings in Brazil and the Netherlands 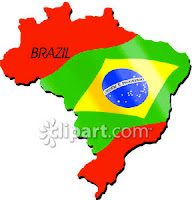 You had to know this would happen. A few of the gun guys on my blog seem to want to excuse the gun deaths in the U.S. by pointing to Brazil and saying that their strict gun control laws don't work since a terrible school shooting just occurred there. So I have a cynical suggestion. Let's not try to change our gun policies to prevent people who shouldn't have guns from getting them. As long as gun control laws don't work anyway, and evidence of that is surely found in the terrible school shooting in Brazil, it is useless to even try. Really? Not. Since this has come up, I have decided to do a little research.

Here is what I found. There are varying studies and statistics regarding gun deaths per 100,000 which is the only fair way to compare. Yes, Brazil's population is less than that of the U.S. Yes, they have a lot of gun homicides but the numbers are different with each source. That is also true of the numbers in general comparing country to country. That is because each country has a different way of reporting their crime statistics and some do not include suicide and accidental gun deaths. Unless I specify differently, I include all types of deaths by gun when I talk about the statistics. But because they are sometimes not included, it is worth noting that according to almost every source I have seen the U.S. leads the world in gun suicides. I wonder why?  We have many accidental gun deaths not seen in other countries. I wonder why? Could it be access to guns in homes and lax gun laws in general that allow for people to have guns everywhere? I'm just wondering?

This chart seems to be a pretty accurate one and relatively recent comparing gun deaths overall per 100,000. I have quoted this one before from the University of Utah because of the way they did their comparisons. It also does not come from a  source that may not be neutral where there appears to be some opinion mixed with fact. Here is an older comparison from MedicineNet.com showing similar figures to the University of Utah chart. These both show that the U.S. has the highest number of total gun deaths per 100,000 than civilized countries not at war. Brazil is a fairly close second. Here is an article from Bloomberg News that discusses a 2005 referendum in Brazil concerning the country's gun laws. It clearly states: " Brazil, the world's leader in gun- related murders, is divided over a proposal to ban the sale of firearms that President Luiz Inacio Lula da Silva says would help curb an increase of violence in the country." The 2005 article also says this: " Brazil's annual rate of gun deaths has climbed to 21.7 per 100,000 people, second only to Venezuela among 57 countries surveyed by the United Nations Educational, Scientific and Cultural Organization." This seems to contradict the studies I linked to above. It also discusses this fact about the 2003 gun law in Brazil that called for "turning in guns" : " ``The handover of guns was the only new fact that could explain a change in the trend last year,'' Otaliba Libanio, the ministry's director for health analysis, said in an interview in Brasilia. ``The drop in death tolls was bigger at states that had higher collection of weapons. ''More than 350,000 firearms were turned in after the campaign began on July 15, 2004, compared with an initial goal of 80,000, the Justice Ministry said."


Now before the gun guys get tied in knots over what I have written, let me say this. I understand that Brazil has a high number of gun deaths and appears to have a very high number of gun homicides. Different articles show different facts. And further, the NRA has a long arm and got itself involved in Brazilian gun politics. Why should I be surprised? From the article: " The NRA says it is worried that Brazil is a stepping stone to an eventual assault on the Second Amendment. They worry that global gun control momentum could mean a U.N. treaty that could come up for ratification at a time when the NRA's foes are in power. Furthermore, the NRA has recently been showing a northern neighbor tricks for building a lobbying group to head off what the Canadian Shooting Association calls the "U.N. Small Arms initiative to control and ban your guns.""We have a federal election looming on the horizon and we must be prepared," according to newsletter sent out in recent days by the Canadian group. "And who better to show us how than the most powerful lobby group in the world, the National Rifle Association and their Institute for Legislative Action?" Right.


I am intending this not as an argument about whether gun control works but to show that even in countries that have strict gun laws, shootings happen. I have never said that passing laws similar to what other countries have would prevent all shootings. Also, because there has been a school shooting in Brazil does not mean that I or other gun control groups will pack up and go home because other countries with strict gun laws also have school shootings. We will continue doing what we do knowing that our laws are too lax and too many people die every day due to gunshot injuries. That is an undeniable fact. And Brazil is not proud of their high number of gun deaths either nor should they be. They, at least, have made attempts at passing stricter gun laws. Their country has a lot of small arms trafficking as pointed out in the article above and also manufactures a lot of the world's guns. There are vested interests involved, as always.


Now to the Netherlands. The citizens there are horrified over the carnage caused by a shooting at a mall. Here is a country where very few gun deaths occur at all ( chart from MedicineNet.com showing .70 per 100,000) , let alone a mass shooting involving an automatic weapon and other guns allegedly legally owned by the shooter. Gun laws are very strict in the Netherlands with gun ownership seen as a privilege rather than a right. From the article: " "This is something you usually see in America, not in the Netherlands," said local resident Martin van der Ploeg as he fixed his motorbike near the mall in Alphen aan den Rijn, 46 km (29 miles) south of Amsterdam." Isn't it a great honor to be known for our mass shootings?


Bad things happen even with the best attempts to stop them. We do not live in a perfect world. Guns are lethal weapons which is why most countries make attempts to regulate  who can own and carry them, where they can be carried and the type of guns allowed to be owned. Most countries have systems of licensing and registration of some kind. You can decide for yourself if these laws have made a difference when you look at the charts  of gun deaths per 100,000. Common sense tells us that these laws do matter. If they save one, two, three or more lives, they are worth pursuing and enacting. It will now be interesting to see if Brazil and the Netherlands engage in a national discussion about gun laws and if they do something to change their laws after such carnage. Our country can't have that debate because of the ever present NRA and it's powerful hold on the national gun culture and our elected leaders. It will also be interesting to see if the NRA decides to get involved in the gun politics of other countries. This article by a fellow blogger asks a good question: " It can happen anywhere. One response is to encourage more good people to carry guns in order to intervene quicker. Another response is to make it harder for dangerous people to get guns in the first place. Which one do you think is the right approach?" The answer from the gun lobby is always more guns. So far that hasn't worked too well so the second approach makes more common sense.
Posted by japete at 11:47 AM