"Gun Fight" at the O.K. Corral 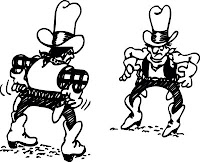 Tonight on HBO, an important film will be shown. The theme of the film is gun violence as seen from the perspective of both sides of the issue. That is why the title is "Gun Fight". There is clearly a "fight" going on about the role of guns in our society and how they can be regulated. I fight for common sense concerning guns and gun legislation. The "gun guys" fight for their rights and think that the gun control organizations are trying to take said rights and/or their guns away. This is not true, of course, but we fight about it anyway. Both sides are convinced they are right which they can't be. But there is a way to find some common ground if only we would stop fighting. Is that possible? Time will tell. I hope you will watch this show tonight. From the sounds of it, neither side will be happy; I'm happy the media is paying attention to the issue. The more light that is shed on how things are and how they can change for the better to reduce and prevent gun deaths and injuries, the more safe our communities will be. I'm all for safety and I'm against all the shootings. Why fight over that? What I want is for our elected leaders to realize that they can fight the NRA and still be elected. They can and should fight for what's right.

The gun fight at the original O.K. Corral has been blown out of proportion as is the gun fight over words and rights today. Only 3 people were killed ( and 3 injured) in the infamous gun fight on October 26, 1881 even though 30 shots were fired. Obviously many of those bullets missed their targets. Over 30 shots were fired on January 8, 2011 at a Tucson shopping center. 6 died and 13 were injured. Actual gun fights still occur only are more deadly thanks to the ease of shooting a lot of people at one time with high capacity magazines and guns that will accept them. Where are we 130 years after the O.K. Corral? Tonight's show will attempt to find out.
Posted by japete at 6:54 AM