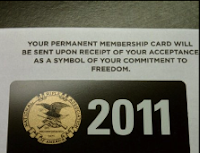 Well folks, I rest my case. Since I wrote my post the other day about the false membership numbers proclaimed by the NRA, I have been told that you can get a complimentary NRA membership when you attend a gun show. Also, the NRA gives memberships away on it's website. I wrote about my friend who is now considered to be a member of the NRA by mistake since he filled out a survey in protest and mailed it in. Now this, from another friend. She took a photo of her new NRA membership on her computer screen. This came to her unsolicited. I know that, in order to belong to some gun clubs, you must become an NRA member even if you don't want to. I have a friend who shoots at a local gun club and had to buy a membership in order to belong to the club. He regularly sends the organization his comments since he does not agree with their extreme views. But he is a member nonetheless by necessity and not by choice. Seriously folks, this is more proof that the NRA has had to inflate it's numbers by giving out unsolicited and/or free memberships to the organization that claims to be a powerful and uber lobbying group.


I have a theory. It is that the NRA has actually lost a lot of members in recent years. Because of it's extreme positions and it's very political nature, many reasonable gun owners have opted not to have an NRA membership. That is the case with a lot of gun owners who I know. One way to bulk up your numbers is to give away free memberships and even make people who don't want to be members of your organization. Then when you lobby Congress, you get to say that you have 4+ million members and you remind them that they shouldn't mess you with you because you represent that many people.


So, if the NRA is as powerful as they claim, why would their Executive V.P. Wayne LaPierre and Chris Cox, Executive Director of the NRA-ILA ( the lobbying arm of the NRA) write this petulant letter to President Obama refusing to participate in meetings about gun issues and reasonable measures to stop American citizens from being shot? The tone of the letter is rude and impertinent- something unusual in a communication with the President of the United States. But the NRA doesn't  respect anyone who disagrees with them. Rudeness and provocativeness is the way of the NRA. And why are they afraid to meet with gun control organizations and the President? Here is the claim-" We welcome any serious discussion on policies that focus on prosecuting criminals and fixing deficiencies in the mental health system. Any proposals to the contrary are not a legitimate approach to the issue." Well then, Oz has spoken. What happens when the curtain is drawn and Oz is found to be just an ordinary little man, in costume, with no more authority or integrity than any one else about this issue? I believe there is a crack in the curtains and we are getting a peek into who is pulling the strings. It is not Oz- it is an organization that refuses to engage with the other side and refuses to consider any measures whatsoever that dare to even mention the word gun. It is an organization that operates to fund itself and buy influence and power in the halls of Congress and our state legislatures. And do remember that the "Wizard of Oz" leaves Dorothy's dream land in a hot air balloon. Such was not a coincidence. Filled with "hot air", Oz is revealed as someone who does not have power after he fooled his kingdom as well as Dorothy, the Tin Man, the Cowardly Lion, and the Scare Crow for quite a while.


Further, the NRA is afraid of something else. Could it be this? "Now conservatives do their best to delay meetings at the White House, or they just outright refuse, as LaPierre did. Why? I think it's partly because Obama scored such obvious public opinion wins at both the retreat and the summit. He's mastered the art of controlling the conversation and sounding like a voice of reason in settings like this, and conservatives — especially tea party conservatives — don't trust themselves any longer to come out ahead when they're negotiating with him. They now consider even closed-door meetings at the White House to be traps, and they are, to put it bluntly, afraid of Obama." 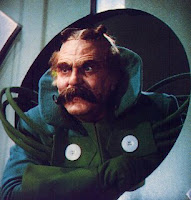 Remember how the Wizard of Oz ends? Dorothy clicks her ruby slippers with intervention from the good witch and "goes home" to Kansas. This isn't Kansas, Dorothy, and we don't have any magical ruby red slippers. We also know that Oz is not who he says he is and can't stop progress. Something is going to come of the President meeting with organizations who care about gun violence prevention. I hope the President will be emboldened by the NRA's letter and refusal rather than retreating from the issue because of fear of the "4.5 million" member strong organization. If the NRA and it's members are wise, they will be involved with the solution. If they decide to sit it out like a stubborn and revengeful child, they may not like the solutions. Common sense just might actually prevail.
Posted by japete at 2:35 PM