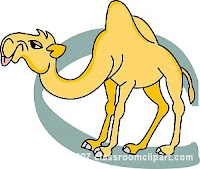 I guess I'm not the only one to see the slippery slope leading to guns everywhere and carried by anyone. This columnist from the Roanoke Times hit on the same general theme I have been writing about. The ubiquitous camel has its' nose under the tent of common sense and is managing to win some skirmishes regarding guns and gun laws. But I am not convinced that that camel won't have to back out and go find another tent for a while. The commenters on my blog posts are utterly convinced that their view is really the only one that makes sense. They have spent a lot of time trying to convince me that I am crazy and don't know what I'm talking about. Their bluster, their bullying, their accusations, their rudeness, their bombastic remarks and their general "in your face" comments are why common sense gun legislation is stalled in the houses of Congress. Our elected leaders are afraid of this stuff. If they get even half of what I receive on a daily basis, no wonder they run away from common sense. Who wants to deal with this stuff? And it gives the impression that these people represent rational thought and majority opinion. Indeed they do not.

Over and over again, polling data show that a majority of Americans want measures to stop senseless shootings. The public does not want felons to have guns, or those who are dangerously mentally ill, or domestic abusers. I know that anyone can purchase pretty much any kind of gun without a background check from private, unlicensed sellers at gun shows and other venues. If anyone can buy guns because laws do not prevent them from doing so, then most likely anyone will buy guns. Over and over and over again, this argument has been made by me and not believed by many of my readers. There are a number of hidden camera videos that show how easy it is to buy any type of gun from private sellers at gun shows. Now several commenters here have argued that the folks in these videos buying guns are not felons. That is missing the point. How does the seller have any idea that these ordinary folks are not felons, domestic abusers, terrorists or those who are dangerously mentally ill? The answer is, the seller doesn't know. But they don't mind making the sales. Just follow the money.

Here are links to various videos and reports showing hidden cameras at gun shows all over the country where unlicensed sellers are allowed to sell at gun shows without background checks. First, the University of California Davis Health System provided this report about what they saw at gun shows. This one shows photos of the guns available at the gun shows. Note that the researchers here attended 78 gun shows in 19 states. The report is a comprehensive indicator of what is going on across the country. Here is the Brady Campaign video of Colin Goddard, Virginia Tech shooting victim, going to gun shows across the country, including in Minnesota, to show how easily he could buy guns without background checks. This one is from the City of New York, showing the same thing the other videos have shown.

And then ABC's 20/20 program ran this video of Omar Samaha, brother of Virginia Tech shooting victim, Seema, who died in that tragic shooting. Omar went to a Richmond, Virginia gun show with the ABC camera crew in the parking lot outside of the gun show. Omar went in and out of the gun show and bought ten guns which he brought back to his car trunk. Some of the "gun guys" I know have said that criminals don't get their guns at gun shows. They buy them out of car trunks. In this video, Omar could have sold a gun to someone right out of his car trunk in the parking lot had he had the right gun. How did anyone in that gun show know that Omar was not a terrorist, a felon or a domestic abuser? They didn't- and yet he bought ten guns that day, including the same type of pistol used to kill his own sister. All were bought without a background check and several with no I.D.

These sorts of gun sales are happening often. There are thousands of gun shows every year in our country. There are criminals and others who know how easy it is to walk into gun shows and without even showing simple I.D. in some cases, walk out with an M 16 look-alike or an assault weapon. Assault weapons , I have been told, are used for recreational purposes and hunting. Mind you, they are not necessary for such activities since there are plenty of other guns available for these purposes. In my opinion, these type of guns are scarier- yes scarier- than regular hunting guns that my family used when I was growing up. That may be why these are weapons of choice for many of the gangs and criminals using them to kill each other or police officers on our streets. ( I have addressed this in other posts). I know nobody with an assault type weapon. Oh, except for my friend who tried out the system in Minnesota and bought one at a gun show from a private seller, no questions asked. And if there is nothing for my gun guy friends to be afraid of or are hiding, why would we they oppose trying to  keep these guns from falling into the hands of people who should not have them? It's just common sense.
Posted by japete at 9:50 AM