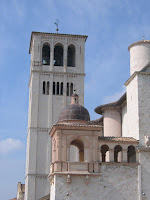 On Sunday, September 12th, my own Minister chose the Prayer of St. Francis for a congregational reading. The topic for that day was the intolerance and hate that had fomented during the weeks leading up to September 11th and the "Ground Zero Mosque" including the possible burning of Korans by Florida Pastor Terry Jones. It was good to remind us of what St. Francis was telling his followers and what he can teach us still. Four years ago, on a trip to Italy, my husband and I went to Assisi as part of a tour. It was a beautiful city with the old city on a hilltop as so many of the Umbrian and Tuscan towns are. We were able to walk through both of the churches there- the upper and the lower, which had been opened not long before our visit after an earthquake did serious damage to the church. The story of St. Francis and his teachings was written in words and pictures all around the walls of the upper church. There was a service in the lower church which we briefly observed. We were there close to the October 4th celebration of St. Francis "feast day" and the anniversary of his death ( October 3rd). As a result, there were many people of faith and the Catholic faith, in particular, in Assisi while we were there. 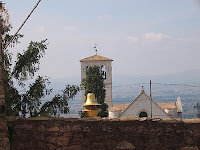 The old town above the beautiful church was charming with it's winding narrow brick streets not meant for cars. People live along these streets where their earthly needs are brought to their homes by bike, or carts or on foot as the streets go higher and get narrower. Unexpected turns surprised us with views of the valley below and the fall landscape- gold vineyards and yellow sunflowers. It was truly peaceful and felt almost spiritual.
St. Francis is known by Catholics as the Patron Saint of animals and the ecology. I am not Catholic so I not so familiar with the Saints. There are several churches in my community though that perform the blessing of the animals. I like the beginning of the Prayer of St. Francis:" Lord, make me an instrument of your peace, Where there is hatred, let me sow love; where there is injury, pardon;..."  Certainly working towards a country where gun deaths and injuries are not so pervasive and working towards public safety, peaceful solutions to arguments, preventing children from having access to guns and encouraging people, if they have guns, to store them safely, is working towards peace and justice.
The United Church of Christ church to which I belong has been supportive of my efforts. Themes of anti-violence in general and in particular, violence against women, children and people of color, are often front and center at my church. Also discussed are ways to prevent violence. Many in my congregation have signed post cards and resolutions. My church joined in the lawsuit against the state of Minnesota over the requirements in the Minnesota Personal Protection Act to post signs on the outside of our building and to require greeters to inform people they shouldn't carry guns into church. We won a brief reprieve and stopped the law for a year until it was passed again. I have blogged about this previously. We have held bell ringings at my church and public forums about the gun issue. My minister helped me celebrate my sister's life on the first year anniversary of her shooting by reading the homily from her funeral ( not performed by my minister). Since her funeral was not in my city, many of my friends could not attend so this was a way for them to experience with me, the wonderful words about her from the funeral.


My church is a very important community shared with me by others who view the world and their faith in a way similar to my own beliefs. There are hunters and gun owners there. They have signed a resolution in favor of the gun show background check bill. They don't have a problem with the bill and know it will not restrict any of their rights. I also know that they don't believe that God gave them the right to keep and bear arms but rather that owning guns is a personal decision having nothing to do with their faith. I value their opinions and their willingness to join me in seeking a better world where people are not shot to death in large numbers daily. On this week-end, no matter what faith you profess, I hope you will think of the victims of gun deaths and injuries and give a prayer or a thought to the families and friends who remember them.
Posted by japete at 7:59 AM